You wait for ages and then three come along at once...

Well, here's something you don't see every day. A (sort of) Triple Neck Wal Bass. Well, they only ever made one and this is the third I've come across!!!!


This pretty little (!) thing recently came up in an eBay auction. Funny thing is, it's a copy... of a copy. But by the same guy who made the first copy... Confused?

This is a replica of the Wal triple neck originally comissioned by Rick Wakeman for his "King Arthur On Ice" extravaganza and later gifted to Yes bassist, Chris Squire, and  used to great effect on the track "Awaken" from the "Going For The One" album. You can read more about the original bass here and here... The original is now on loan to the Hard Rock Cafe and the bass which Squire now uses on tour is a copy made by a Japanese luthier.

If you've got about three grand plus  burning a hole in your pocket here's the eBay link:

Here are some photos of the original and Squire copy in action... 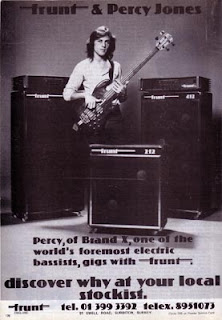 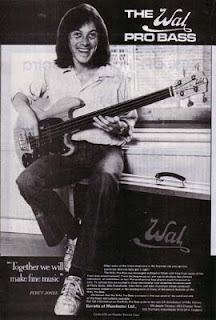 One of the earliest “name” bassists to become a recognised Wal user, Brand X’s fretless wizard, Percy Jones, was literally the poster-boy for the basses. Now resident in the US and gigging regularly with his band, Tunnels, we caught up with him to mine his memories of the genesis of a classic marque.

So, how did you first get involved with Wal? 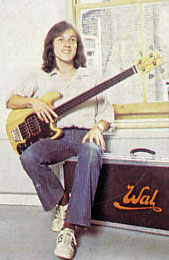 I met Wal when Brand X was rehearsing at Farmyard Studios. I had already become acquainted with Pete The Fish since he used to spend quite a bit of time at the studio. They both came in one day with a prototype bass and asked if I was interested in playing it, at the time I was using a fretless Fender Precision. I tried out the bass and was immediately impressed by the sound and the action. The only problem was that it was very neck heavy and didn’t balance at all well. I pointed this out to them and not long afterwards they showed up with another bass that was perfectly balanced. I started playing this bass and rehearsing with it, after a couple of hours it suddenly went quiet. Turned out that the IC in the preamp had fallen out of its socket. They rectified this problem and then things pretty much rolled along from there.

GLOBAL JUKEBOX: The day the Wal basses changed the world...


The day the Wal basses changed the world...

13 July 1985 was a landmark day for millions of people of my generation - our "Where were you when Kennedy was shot?".  "Live Aid" was the "day the music changed the world", it was the biggest and best gig that any of us had ever seen, it was a day when millions of real people made a difference for millions of real people suffering in Ethiopia and other countries around Africa.  And the Wal bass was there - you could even say it was "instrumental" in the events that led up to the day.

The previous November rock and pop stars of the day gathered in a London studio for an unprecedented recording session - the only logical response of an Irish rock star to a disturbing and moving news item by the BBC journalist, Michael Buerk.  He must have hoped that his news report on the terrible famine in Ethiopia and the Sudan would have raised awareness of the plight of the people there.  He could never have guest just how much and what it would lead to.  At the behest of  Boomtown Rats singer, Bob Geldof, and Ultravox singer/guitarist Midge Ure the coolest, trendiest and some of the uncoolest stars in the UK checked their egos at the door and gave their time freely for charity.  The stellar line up included the likes of Duran Duran, Boy George, Paul Weller, Status Quo, Phil Collins, Spandau Ballet, Bananarama, Paul Young, Sting, George Michael, Bono...  The resulting single, Band Aid's "Do they know it's Christmas" became one of the biggest and most influential singles of all time - raising money for the Ethiopian famine victims and inspiring other projects like the US "We are the World" single.  "Do they know it's Christmas" had its bass line powered by the fingers of John Taylor and a Wal bass. 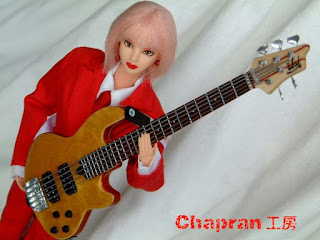 Here's a little curiosity to make you smile...  It's fair to say that ALL Wal basses are wonders of the luthier's art but the Wal bass featured in this section is certainly one of a kind - a microcosm of the bass maker's art.  At first sight it doesn't seem that special... Quilted kauri top, five string, Mark II body shape... so what.  Well, when you scroll down to see the next photos all may become clear. 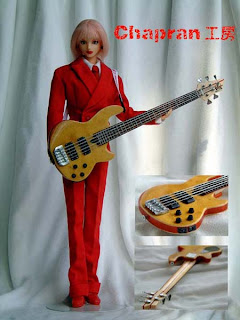 Rather than the normal scale length of 34 inches this bass has a nut to bridge length measuring less than 12 inches.  It is, in fact a beautifully made resin model constructed by a Japanese model maker - "Chapran".

The bass is seen here in all its glory modelled not, as it appears at first sight, by the wonderful singer-songwriter and bassist, Aimee Mann, but a small, blonde, resin doll... According to the Chapran website her name's "Maria" but you probably didn't really need to know that.

This brochure was produced by Electric Wood in the late 1970s to promote the newly launched Pro Bass series. These basses included a number of pretty revolutionary features - particularly for a UK built production bass.

Among them were:
You can see higher resolution versions of the pages below at this link