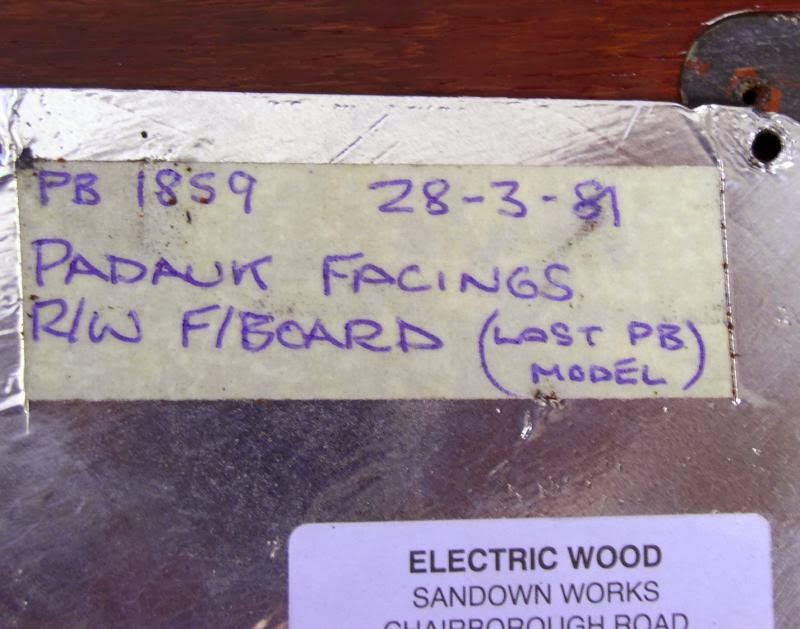 The Custom series basses were introduced in the early 1980s - the transition as a little drawn out with several of the very last few Pro series basses being Custom Series basses in all but name and serial number. A few years ago an interesting bass came to light which is claimed to be the last ever Pro bass produced. Since it was claimed by Wal and Pete on the masking tape inside the control cavity we can take it as a pretty firm indication though... On that basis it is fair to claim that the first Custom series basses were produced in April 1981 (sort of). 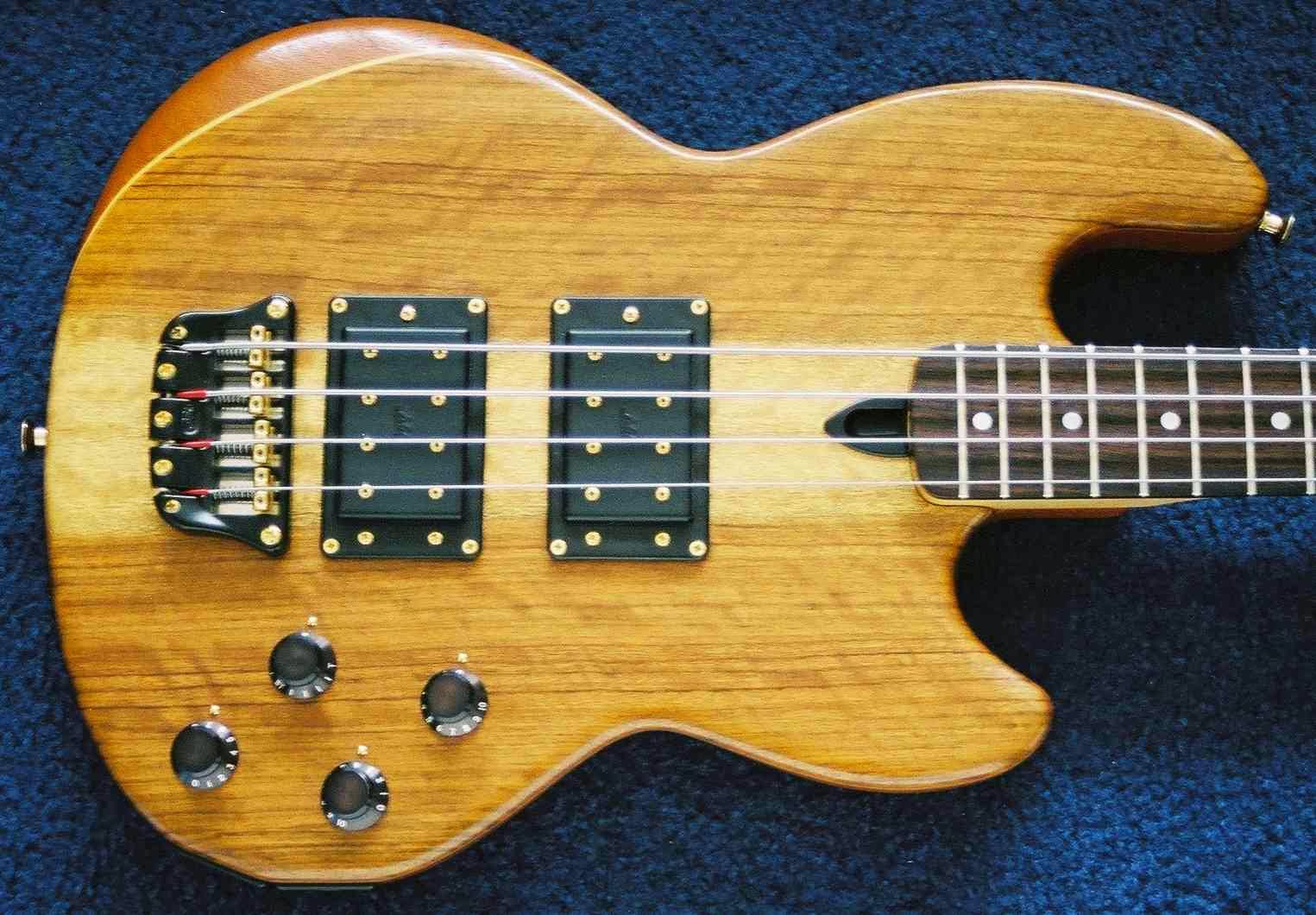 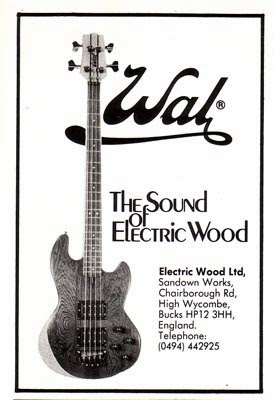 The specs for the new basses were as follows:

The following text is taken from a flyer for the Wal Custom series which was used in various guises throughout the late 1980s and 1990s. It describes the construction and some of the options available... 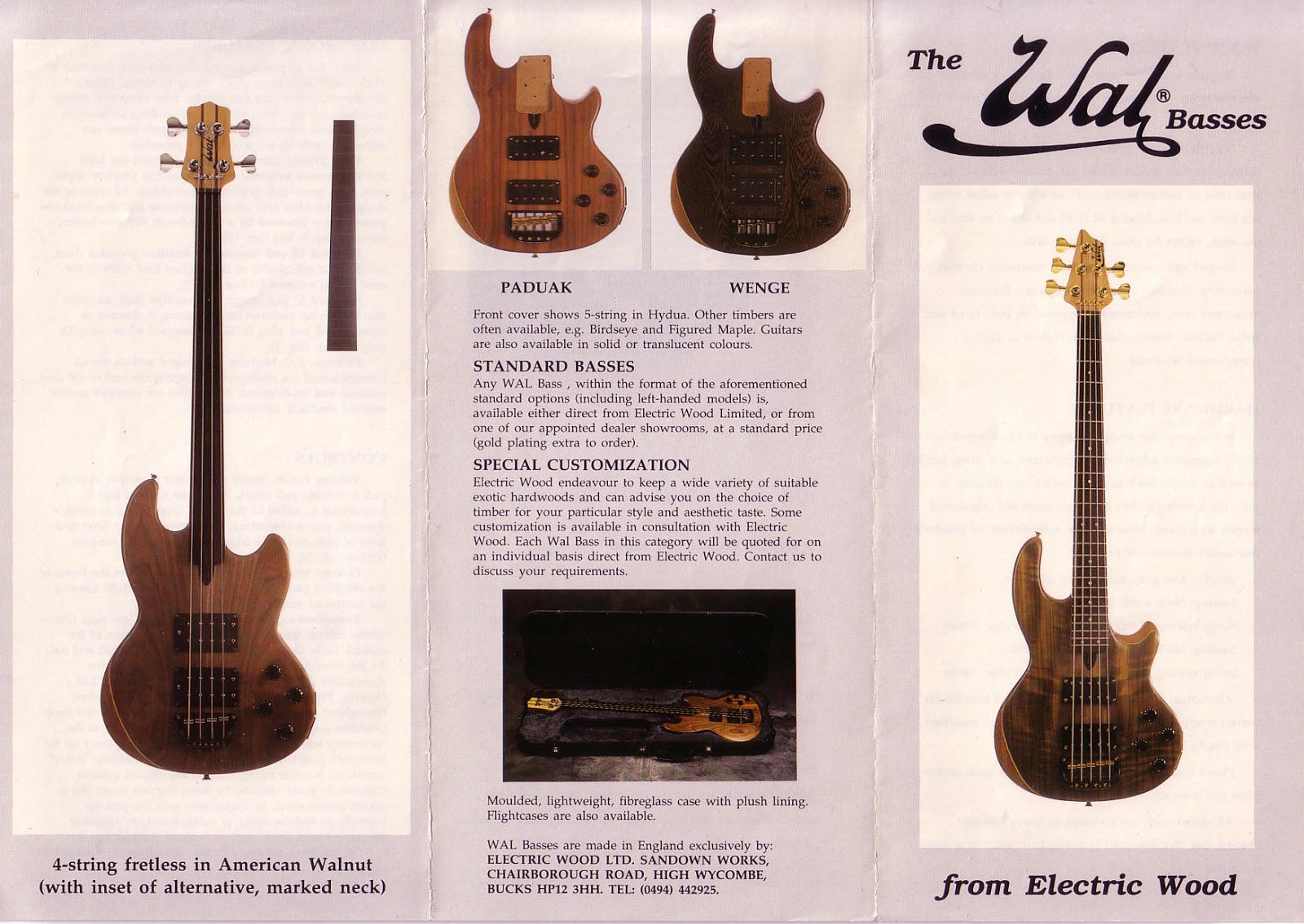 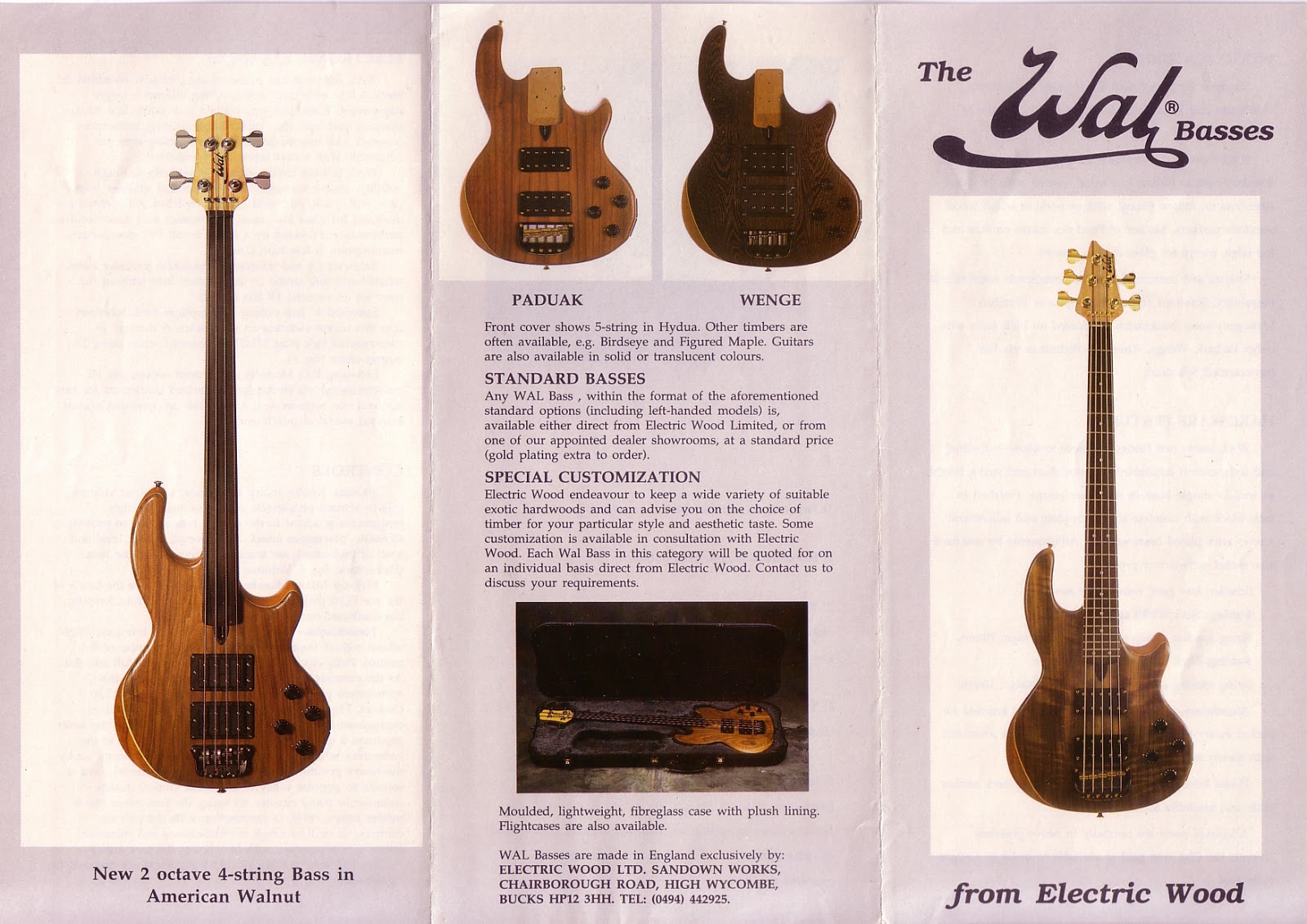 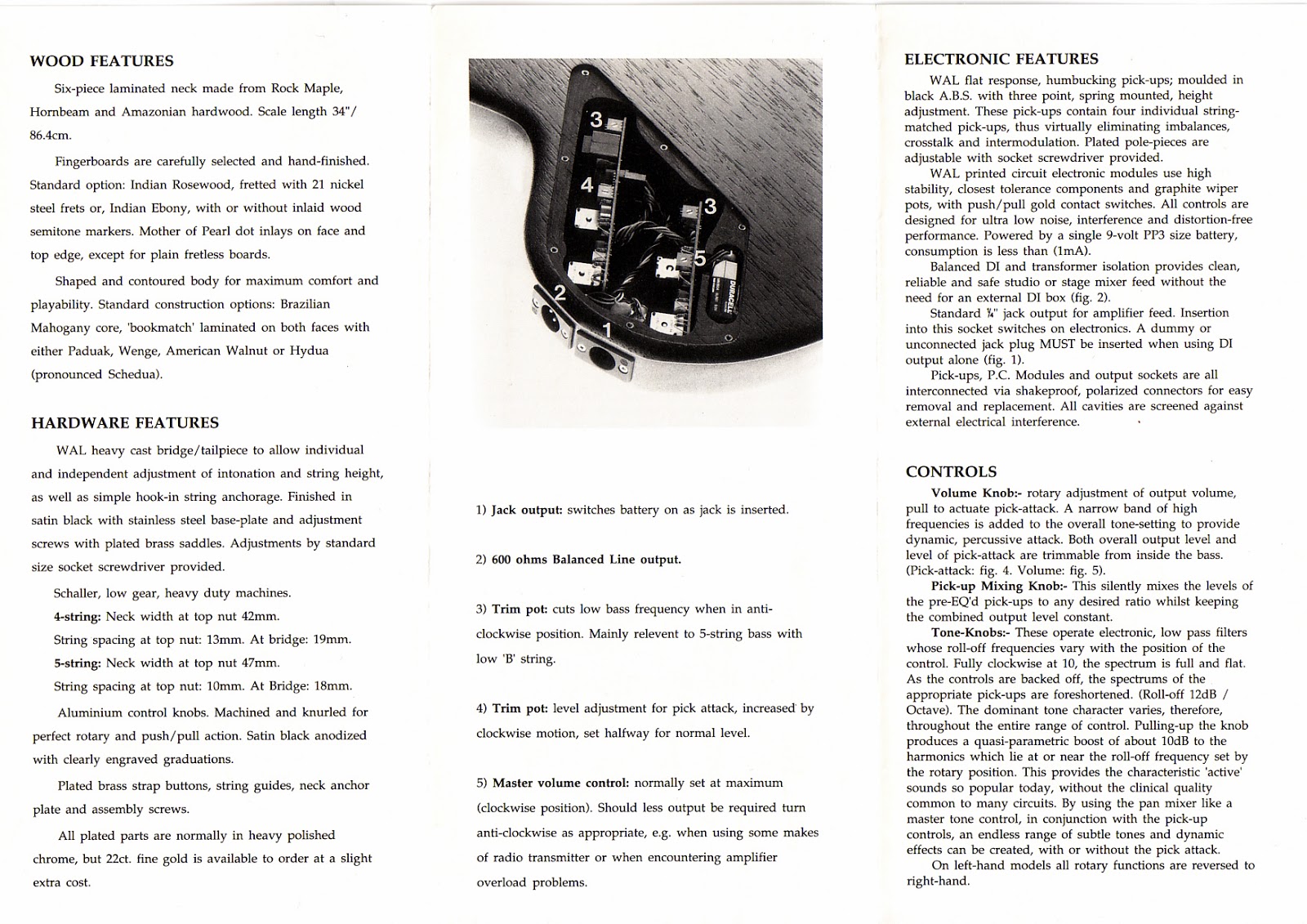 Balanced DI and transformer isolation provides clean, reliable and safe studio or stage mixer feed without the need for an external DI box.

Standard 1/4" jack output for amplifier feed. Insertion into this socket switches on electronics. A dummy or unconnected jack plug MUST be inserted when using DI output alone.

Pick-ups, P.C. Modules and output sockets are all interconnected via shake-proof, polarized connectors for easy removal and replacement. All cavities are screened against external electrical interference.

Volume Knob:- rotary adjustment of output volume, pull to actuate pick-attack. A narrow band of high frequencies is added to the overall tone-setting to provide dynamic, percussive attack. Both overall output level and level of pick-attack are trimmable from inside the bass.

Pick-up Mixing Knob:- This silently mixes the levels of the pre-EQ'd pick-ups to any desired ratio whilst keeping the combined output level constant.

Tone-Knobs:- These operate electronic, low pass filters whose roll-off frequencies vary with the position of the control. Fully clockwise at 10, the spectrum is full and flat. As the controls are backed off, the spectrums of the appropriate pick-ups are foreshortened. (Roll-off 12dB / Octave). The dominant tone character varies, therefore, throughout the entire range of control. Pulling-up the knob produces a quasi-parametric boost of about 10dB to the harmonics which lie at or near the roll-off frequency set by the rotary position. This provides the characteristic active sounds so popular today, without the clinical quality common to many circuits. By using the pan mixer like a master tone control, in conjunction with the pick-up controls, an endless range of subtle tones and dynamic effects can be created, with or without the pick attack.

On left-hand models all rotary functions are reversed to right-hand." 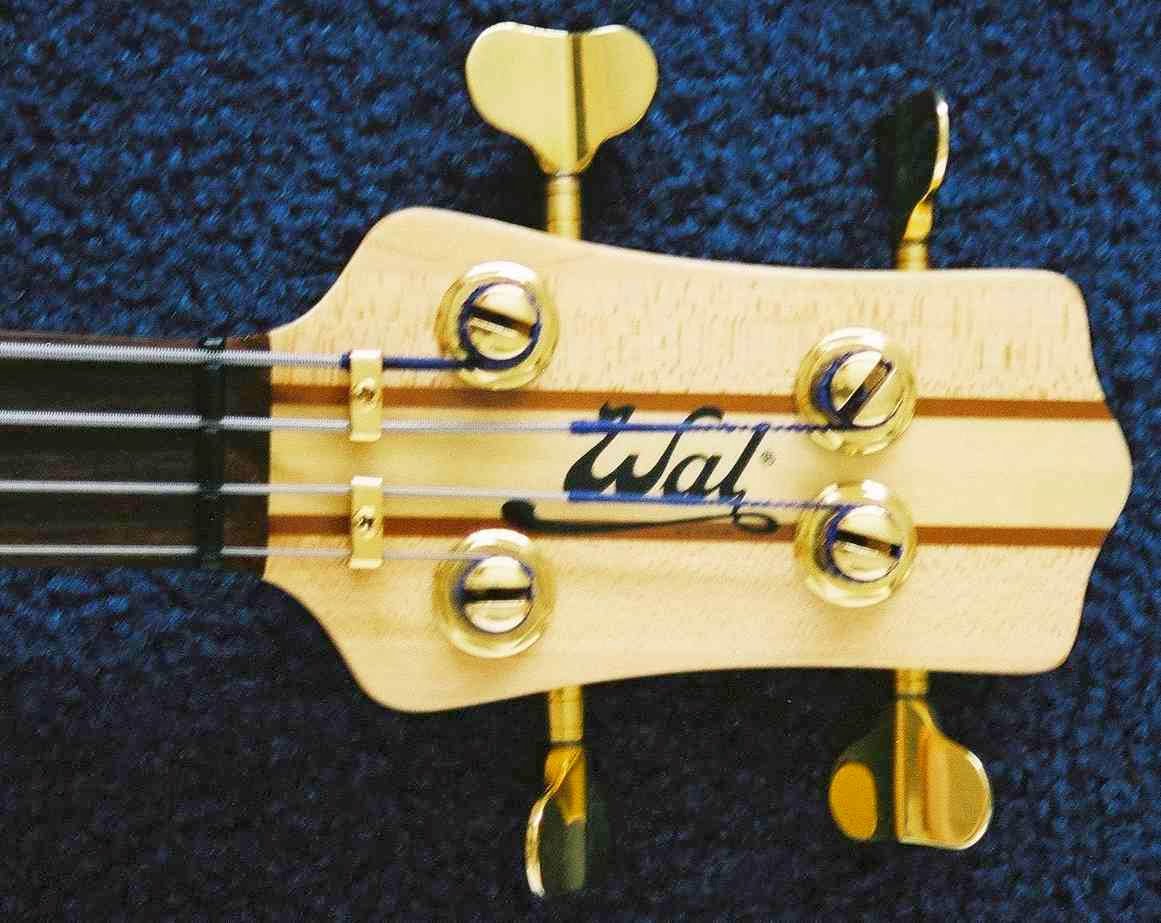 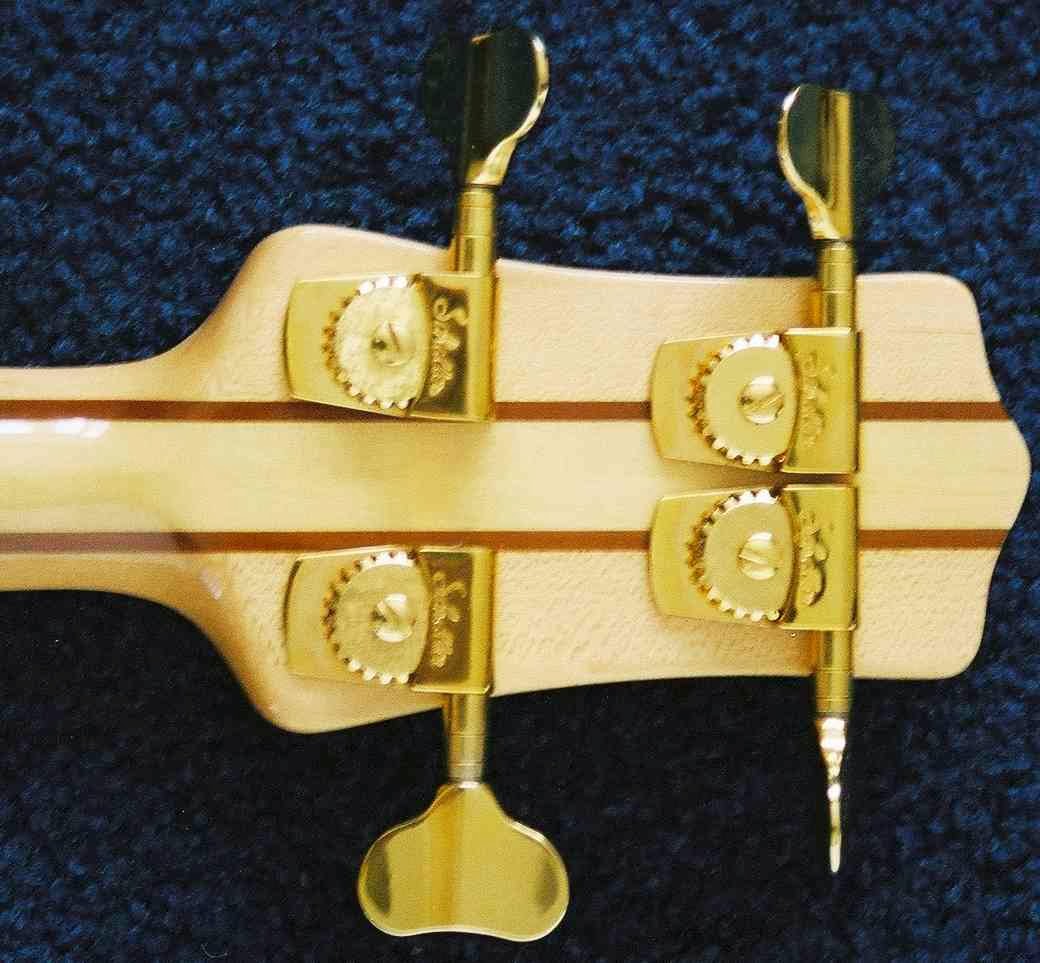 There isn't much about a Wal which could be described as standard and a wide range of custom wood options have been used to create some amazing looking basses over the years. However, here are the details of the four exotic wood facings which Wal offered as their standard woods...

American Walnut (Juglans nigra - also known as black walnut):  The heartwood is a light chocolate brown and varies from relatively plain to quite heavily figured (usually with swirling patterns rather than quilting or flaming).  Pete considered that this wood is the best choice for a fretless bass, giving the best fretless tone.

Wenge (Millettia Laurentii):  A very dark, dense wood, usually with a fine straight grain.  However some interestingly figured examples can be found.  Considered by many to give the hardest, punchiest of Wal tones. For an example of a more figured Wenge-faced Wal bass see picture below.

Paduak (Pterocarpus soyauxii):  The heartwood of paduak is characteristically reddish in colour, varying to a dark, chocolate brown and usually with a straight grain.  The sap wood is very pale in colour and is sometimes used as a contrasting, book-matched centre stripe on Wals (see example above). 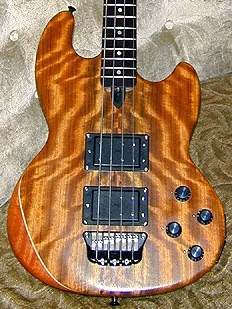 Schedua (Guibourtia Ehie):  In some ways the "standard" Wal wood, schedua (also written "shedua" and "hydua") is a rich golden brown colour.  The sapwood is a much paler colour and, as with paduak, is sometimes used to create a bookmatched central pale stripe on the facings.  However, the difference in colour between heartwood and sapwood is more subtle with schedua than paduak.  Schedua is also commonly known as "ovangkol" or "amazaque" and comes from the same botanical family as "bubinga".  Schedua often displays a unique form of flaming which can vary from fine and subtle patterns to the wild flame shapes shown above.

While the above book-matched wood options have become familiar on Custom Series basses, Electric Wood did experiment with some other configurations on their early Custom basses. The first basses featured some beautiful inlaid coach-lining between the two halves of the book-matched facings. This was also seen on some of the very late basses with a PB serial number - transitional basses which were to all intents and purposes Custom Series Wals. This inlay work produces a striking effect but was largely abandoned as the Custom bass went into full production.

Here is a lovely example of this inlay work from one of John G Perry's Mk I custom basses. As per Perry's preference the bass is short scale. It is unusual that the bass features a solid Ash core and a silver Pro series bridge (presumably throwbacks to the previous model's design)... 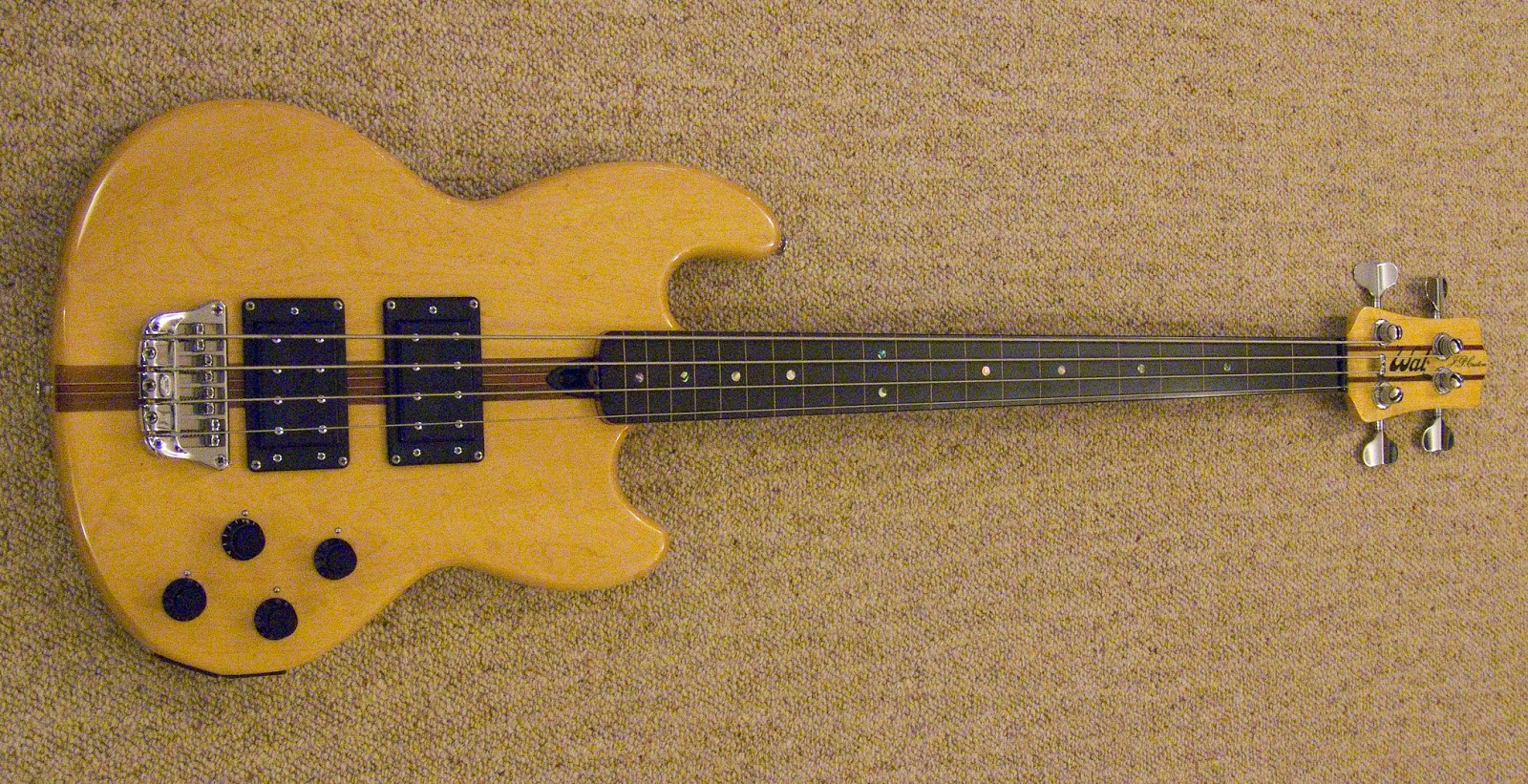 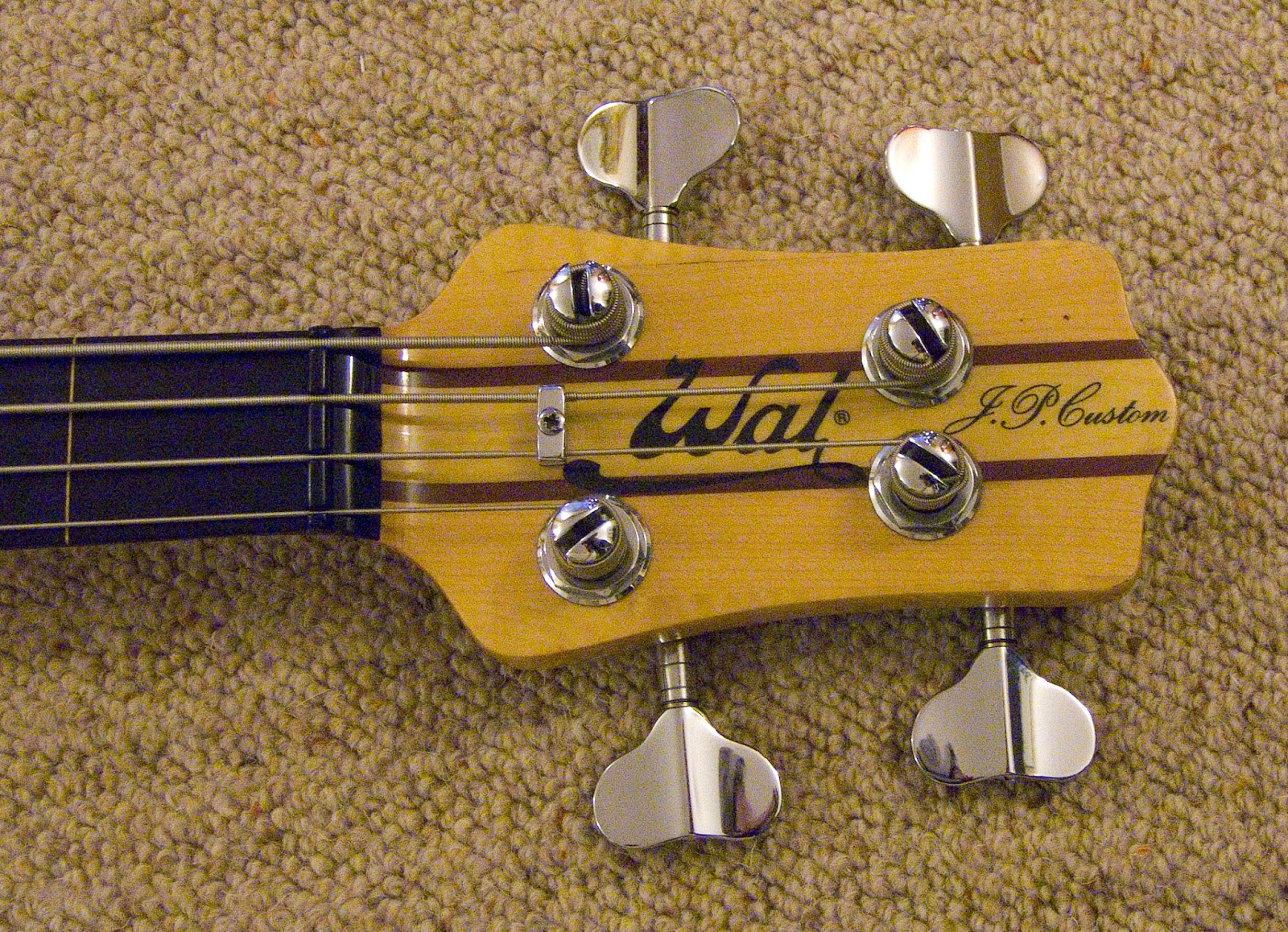 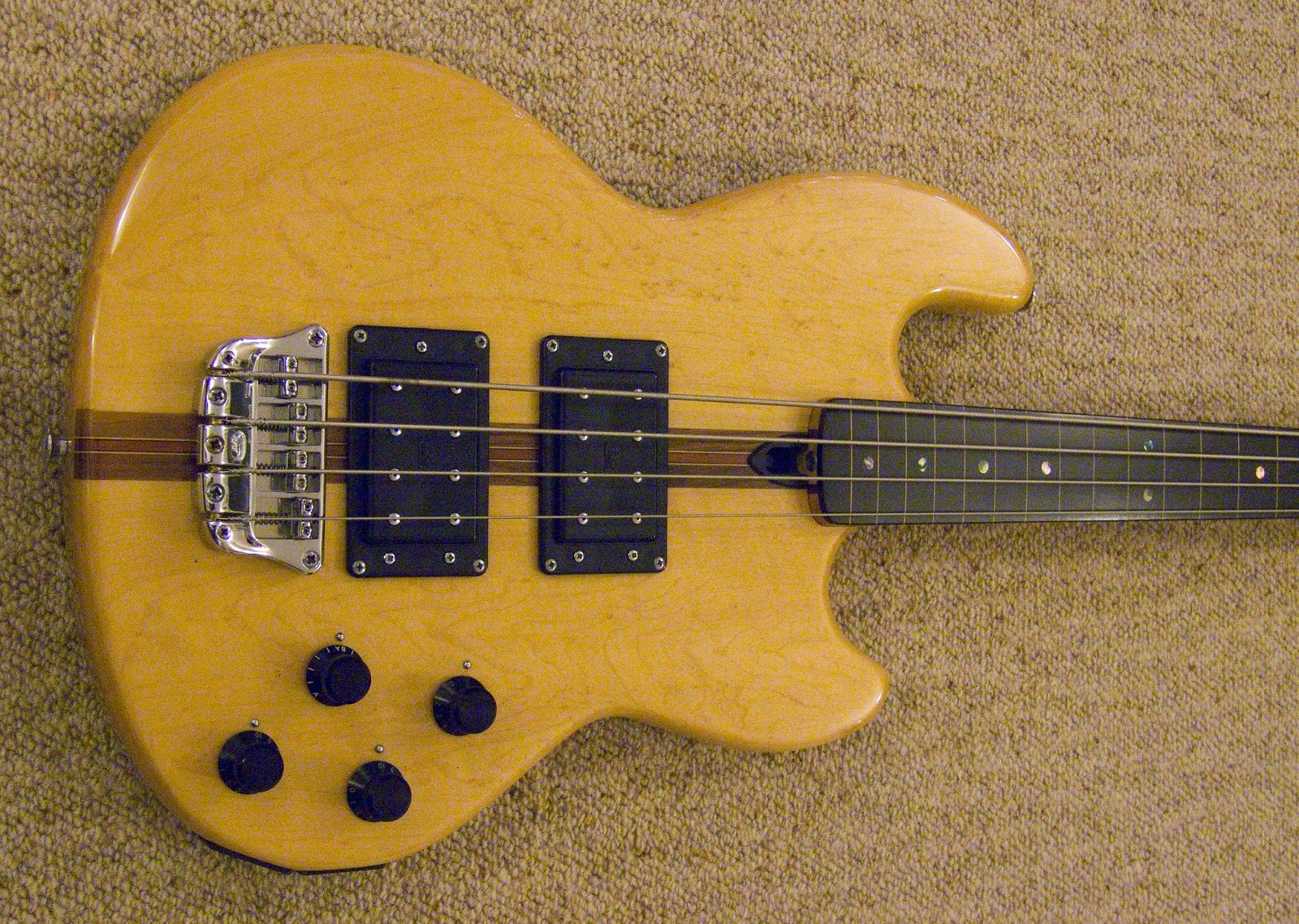 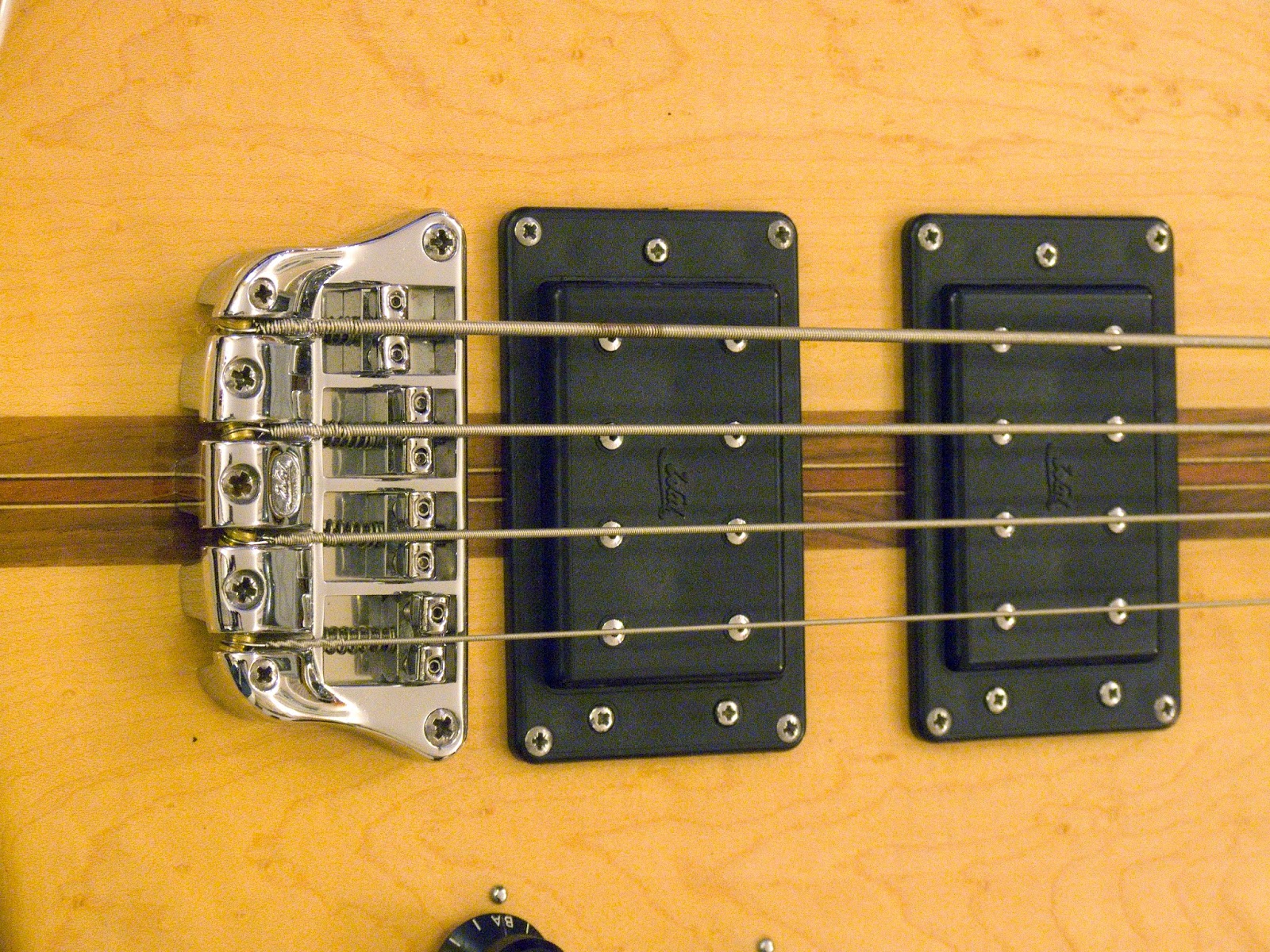 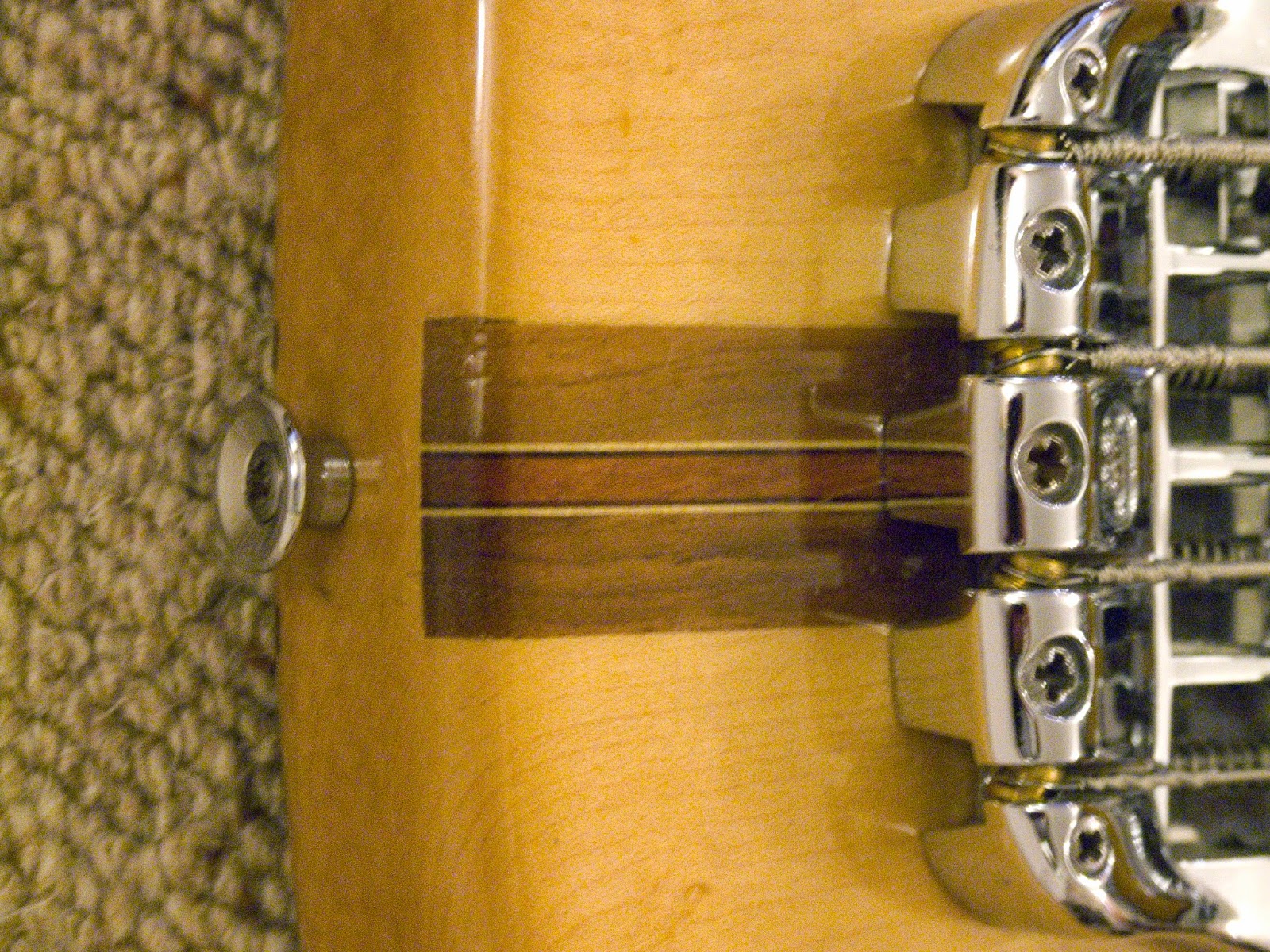 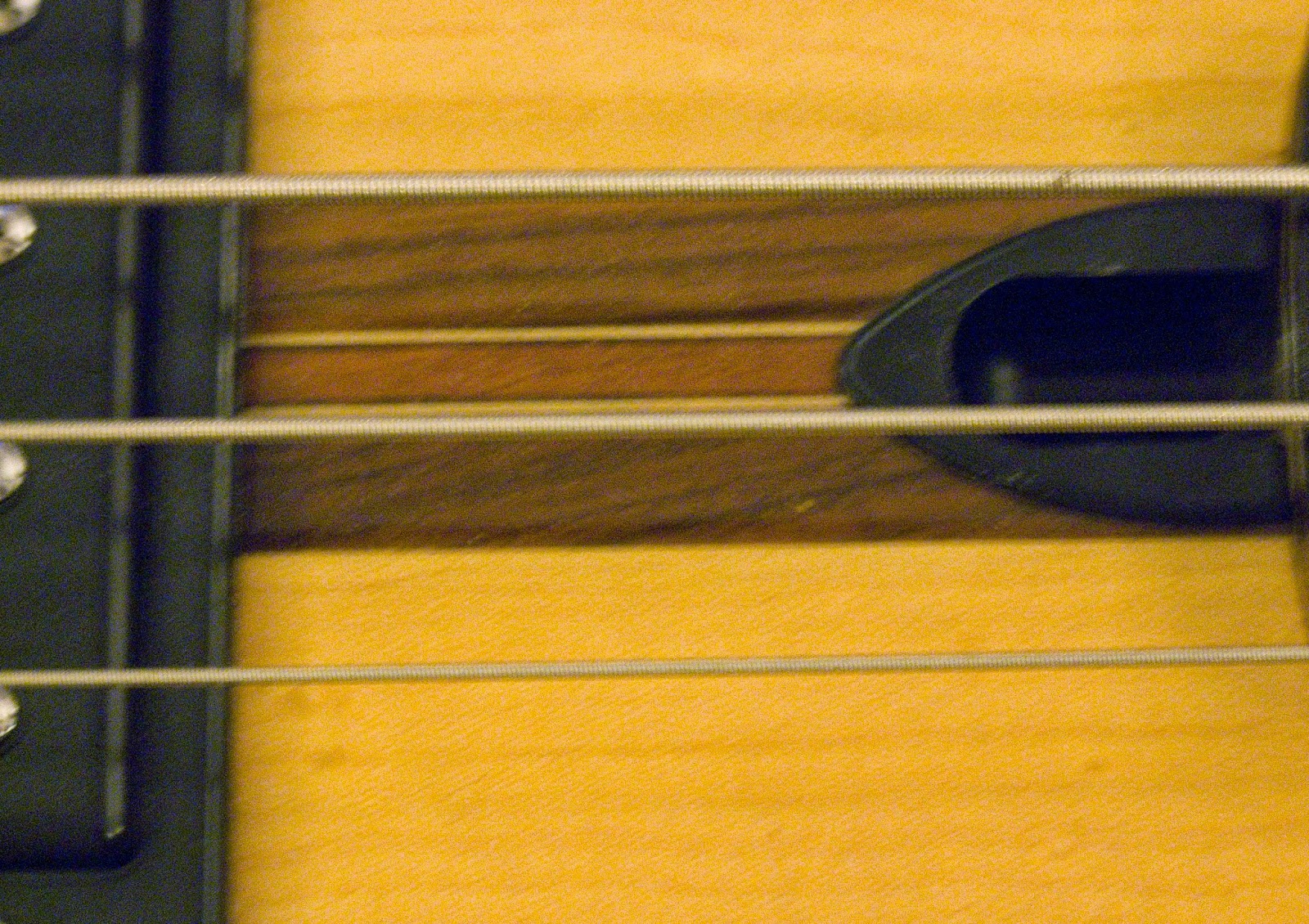 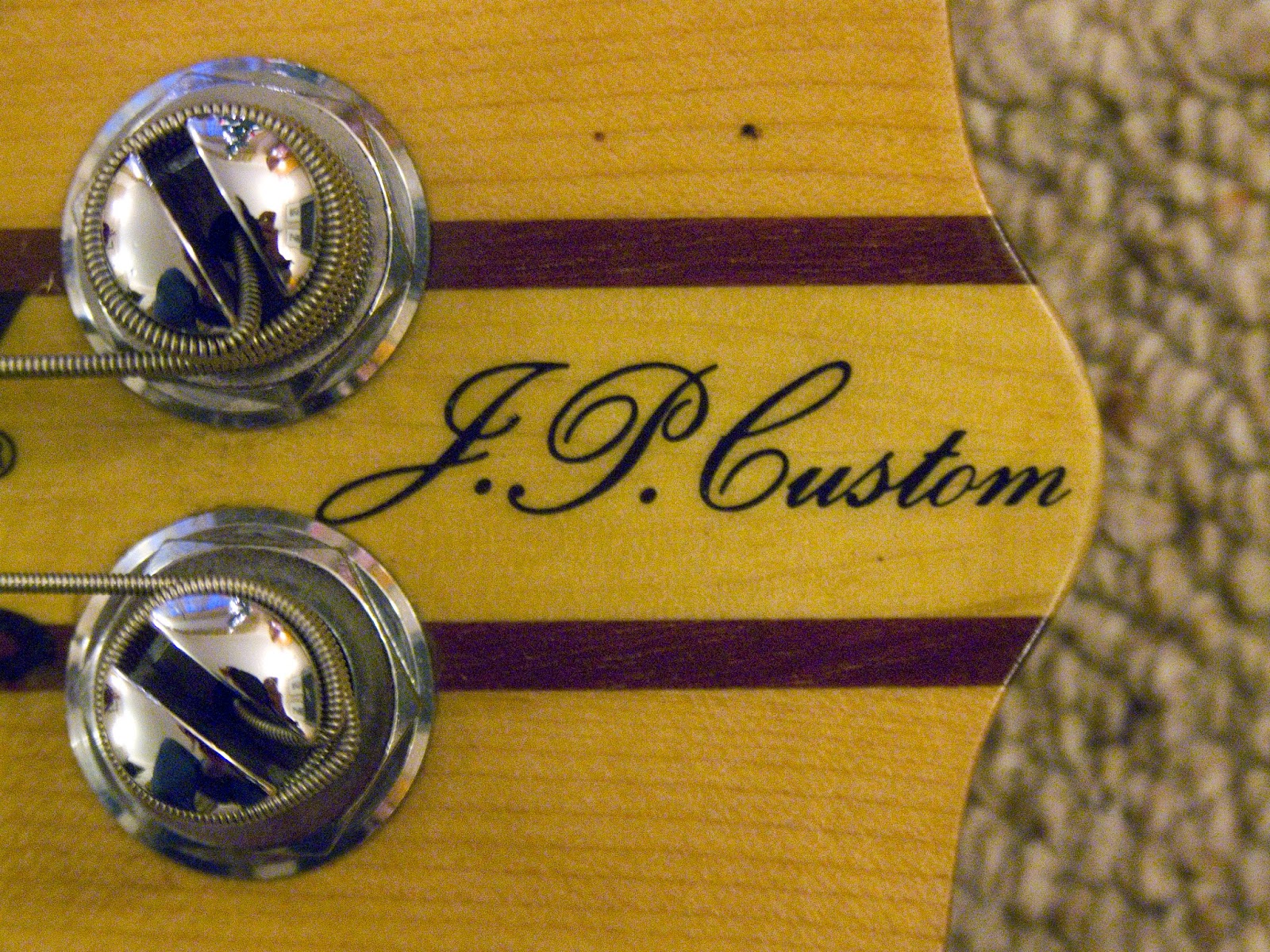 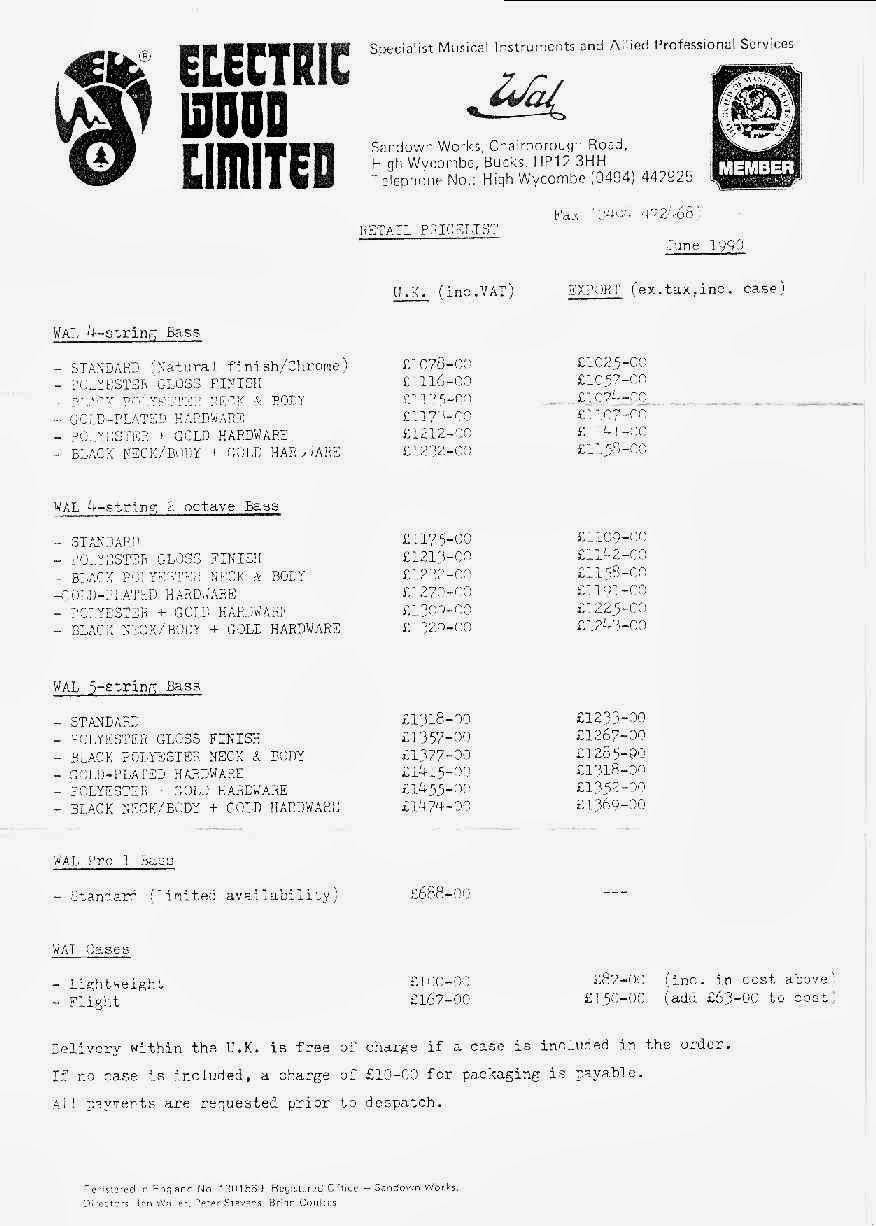 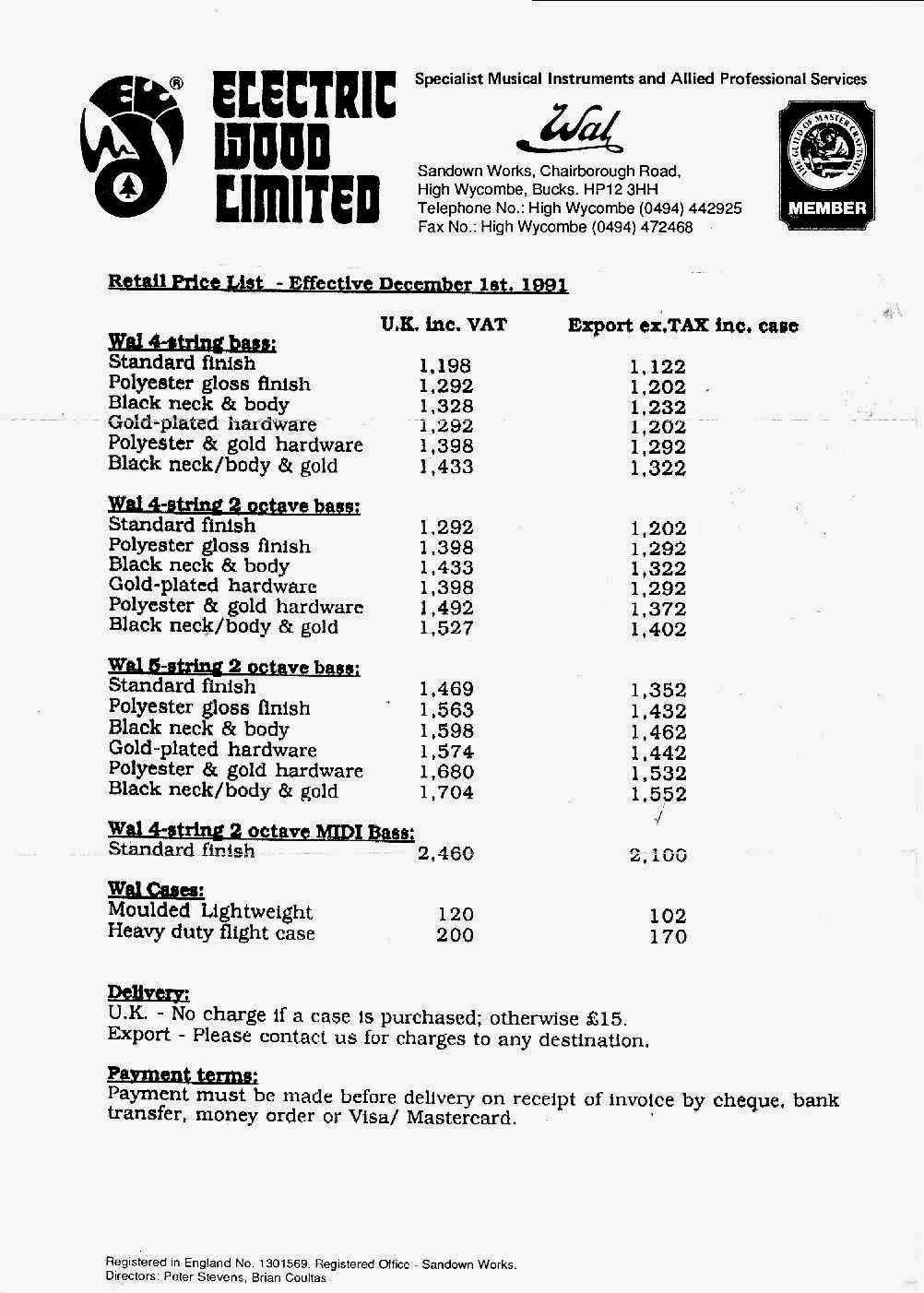 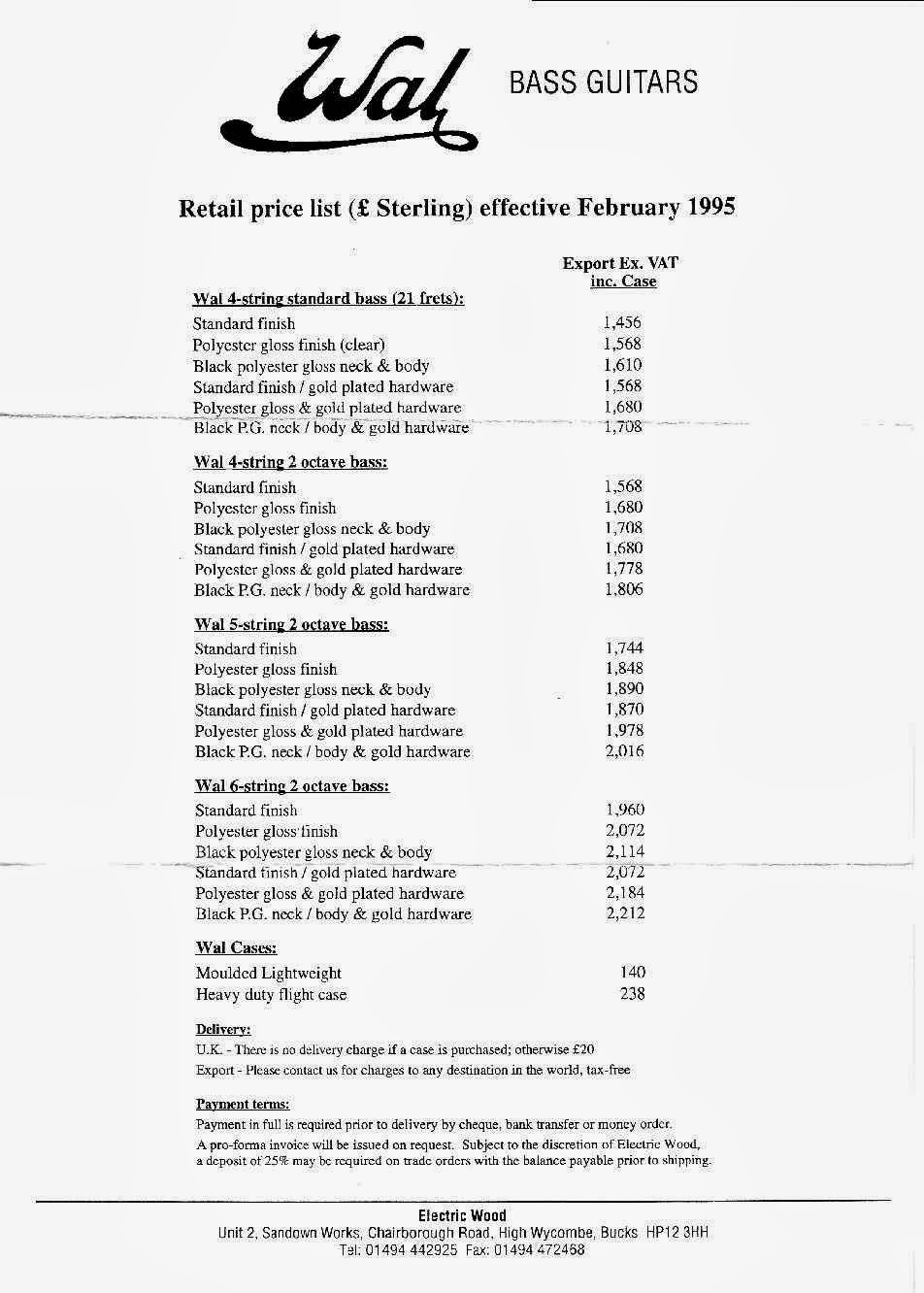