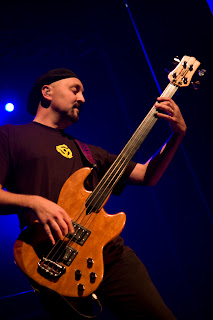 
When I got really interested in playing fretless, I chose to get another Wal, as I felt that having spent a couple of years playing the fretted, I’d find the transition to fretless easier, playing an instrument with the same string spacing and neck feel. I bought my fretless Wal second-hand in 1991 (they were much easier to find then) through an advert in Loot, I felt a little bit bad though, I could tell the guy didn’t really want to sell it.


And, actually, just last week I bought a fretted Wal from Jack Monck [former Syd Barrett bassist]. It’s another Mark 1 with a mahogany core and wenge facings. So now I have two fretted Wals, and one fretless.


What particularly attracted you to Wals?
I’ve always admired their construction - the solid feel - and the amazingly flexible tonal variations that are possible with the pick-ups. I really like the wood finishes on my own Wals, so I think “Electric Wood” really is an apt name for the Wal company. Sonically, my fretless especially fits really well with the earlier, spacier Porcupine Tree material.


It’s difficult to pinpoint just one thing that suited me, I felt immediately comfortable playing the first one I had, I always managed to get a sound that fit whatever I was playing, and the legendary reliability has seen me through a lot of gigs. When recording In Absentia in 2002, Paul Northfield (Rush's sound engineer) tipped me to blending two bass signals, one distorted and one clean, for a sound that really helped the bass sit well in the mix. Having the two outputs on the bass was especially useful for this, I seem to get better results than using a D.I. box. 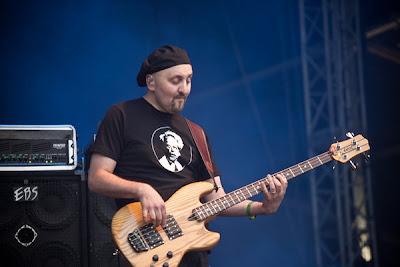 Do you still use the basses for live and recording work?
I still have the basses, I used them for all the Porcupine Tree albums until the most recent one, Fear of a Blank Planet and, actually, I did use the fretted on one track there too.
I mainly used my fretless Wal (and occasionally the fretted) for all the Porcupine Tree gigs and tours from 1993 up to 2005. Before this, I never really felt the need to replace the Wals, or even try any other basses, but I decided to retire them from touring mainly because I’ve had some bad experiences with airlines and freight companies and I started to worry about loss and damage for something that’s hard to replace. Also, I favour down-tuning for some of the more recent Porcupine Tree material too, so playing a fretless all the time became less appropriate.


However, I brought the fretless out on the most recent tour when we decided to play some of the older material, and our very hard-to-please and long-serving soundman actually gave me a hug when he saw it! Actually, I’m just packing my bags as I'm off to a remote studio in the country for a band writing session for the next two weeks, I'll be taking a Wal with me too. 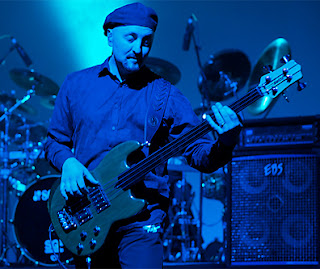 Do you have any particular recollections of Pete Stevens and the late Ian Waller?


I visited the Electric Wood workshop in High Wycombe with Martin Elliott, before I even owned a Wal; this would have been in 1988, not long before Ian Waller died. I remember lots of activity, and the distinctive smell of woodworking. Over the years, I used to get my Wal basses looked at and serviced by Pete every couple of years or so. Pete was always great to talk to, very helpful and enthusiastic about all the instruments. He turned me on to EBS equipment too.
I remember having a pointless argument with a mate of mine about not just using the equipment that your favourite players use - it was only when I looked in my CD collection I realised how many of those I really admire use or have used Wal’s: Jonas Hellborg, Mick Karn, Laurence Cottle, Percy Jones, Bill Laswell, Kev Hopper, Flea... the list goes on!