Introduction and a brief overview of Wal basses

Welcome to my Wal History Blog...

Over the last few years I've gained a reputation as a bit of a geek-meister on the topic of my favourite bassess - the wonderful Wal basses made in High Wycombe by Ian Waller and Pete Stevens through the 1970s, 1980s and (after Ian's untimely death in 1988) the 1990s. I'm a Wal player myself, regularly using my two Wal basses (a 1979 Pro Series Bass and a 1985 Mark I Custom Series bass) playing at church or in the function/covers band of which I'm part.

My basses are working basses - tools of the (amateur) trade - and have become very personal to me over the nigh on 20 years I've owned them. However, they are also fine examples of the master (bass) guitar builder's art. As such their history seems to me to be worth chronicling. For a few years I have had a Wal History site elsewhere on the internet and this has become something of an accepted repository of info on these fine basses. However, an impending possible change of ISP places the site's current web space in doubt. On that basis it seemed to be an ideal time to revisit the site, revise it and to transfer it into a more modern, permanent format here on Blogger.

Over the coming months I plan to populate the site here drawing on the pages already there on my original site. If you have a quick look at the Site contents page (linked to the left...) you'll see that there's quite a bit planned. So please do pop in on an occasional basis to see how far it's got. There are just a few pages populated already (including some bits and bobs which you've not seen before) with more to come. If you're interested in the kind of thing which will appear here I've cut and pasted the Intro and Overview page below.

The site can best be navigated using the pages listed in the sidebar to the left or by going to the Site Contents page where all the content will be permalinked from the index.


Hope you enjoy the site.
Trevor

Wal basses are hand-crafted bass guitars produced since the early 1970’s by Electric Wood in High Wycombe, Buckinghamshire in the UK (now built a short drive round the M25 in Fetcham, Surrey).  Since then they have come to be regarded as the standard by which others are judged on concert stages and recording studios across the world.

In 1982 the first basses of what was to become the "Custom Series" were created.  These dispensed with the scratchplate - surface mounting the pickups and controls - and replaced a solid ash body with a mahogany body core faced with a selection of exotic woods. 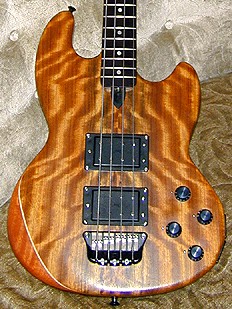