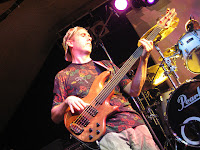 
I had originally wanted to get a Fender Jazz fretless à la Jaco Pastorius but when I heard the throaty sound of the Wal fretlesses and the power, sustain, vibrato and flexibility of tone - plus how beautiful their natural wood finishes are - then I decided that Wal was the fretless bass for me! 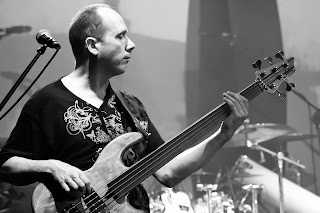 What are your impressions of your own Wal bass?

Just a beautiful throaty fretless tone, warm, rich and powerful, which is the kind of sound that I like. I tend to use one or two favourite tone settings, but the versatility of the bass is amazing and you could play virtually any style of music on it. I was looking for that 'classic' throaty growl and legato sustain, and that sound is there from the moment you pick up the bass.

I'm just so grateful to Percy Jones, Colin Bass and Mick Karn for turning me on to Wal basses in the first place, and I'm just so proud to be the owner of one. In my opinion, if you want a custom fretless bass guitar, then there still aren't many around that can compete with Wal. The beauty of their basses, the quality, craftsmanship, individuality of every single bass, and the love and care that they put into making them, mean that for me at least, they remain among the best bass guitars that you can buy. I just fell in love with them from the moment I first saw Percy Jones playing one.
Posted by TrevR at 22:29