Just to throw more confusion on what constitutes a "Wal Pro bass", when the Custom Series basses were first introduced Wal also experimented with a lower range model.  For a few short periods Electric Wood produced a new, single pick-up, low cost bass also referred to as Pro basses.  For whatever reason these basses were relatively short-lived, remaining as an option on the Wal price list until the mid-80s.  However, in the early 1990s the line was briefly reintroduced - again only for a short time.  These basses were manufactured in response to a major UK music retailer who wanted to be able to offer a Wal bass at a lower price. 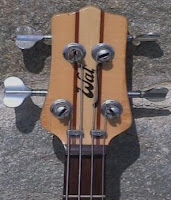 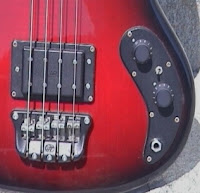 These later period "Pro basses" were equipped with passive tone circuits which were mounted on a small plastic scratchplate and included a tone shaping switch similar to those on the original passive Pro I basses - basically a series/parallel switch.    The headstocks on these later "Pro basses" were also a slightly different shape from the "Custom series" basses.

The true chronology of these basses is not entirely clear. However, they seem to have been an option when the first Custom Series basses were introduced. A number were certainly issued around 1989 or 1990. Clearly this is a design that Wal dabbled with on a number of separate occasions.

Different vintages of new Pro display varying characteristics although always a single, passive pickup. The placement of that pickup varied over time. The earliest basses had the pickup placed in a similar mid-position to the original Pro I and Pro IE basses. However, by 1984 the placement had moved towards the bridge, with a similar position to the Custom series bridge pickup.

Construction varies somewhat too. The body is solid ash although on some basses that core is faced with thin exotic veneers - usually flamed or birdseye maple (of a relatively intermediate cosmetic grade as befits the bass' budget ethos). The body is usually finished in a narrow black to clear sunburst finish. This also conveniently hides the join for the veneer. The bodies are also a slab design without any comfort contours for either forearm or stomach.

Just to add to the confusion sometimes these basses appeared with a PB serial number on the back-plate of the neck, sometimes with a W serial number.
These basses are not commonly seen although they do come up for sale on the odd occasion. However, the following music videos from the early '90s show River City  People bassist, Dave Snell, using a Mark II passive Pro Bass.


This recording of the band live at the Town & Country Club in London shows that, for their stripped down ethos they were still fine sounding basses with a definite Wal tinge to their sound.