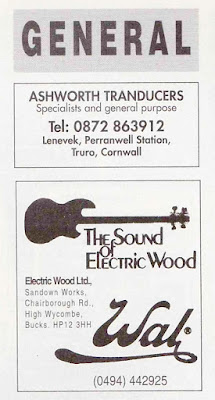 Throughout their history Electric Wood, the company behind Wal Basses (in effect Ian, Pete and maybe a couple of sleeping partners) took out ads in the national music press. For many years it was just a very bijou Wal add nestling in the paid ads at the back of Guitarist Magazine. Minimalist but with all the info that a keen Wal-hunter needed. However, some where a little more all singing and all dancing. Including those featuring their celebrity endorsers... John Entwistle, Percy Jones and Laurence Cottle.

A few of those adverts are attached below for your enjoyment... 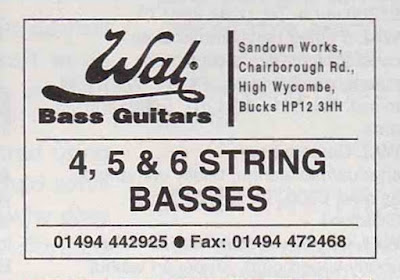 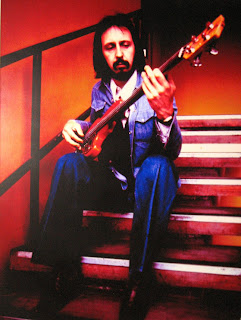 In many ways Wal Basses grew out of Ian and Pete's friendships with the musicians who passed through Trevor Morais' Farmyard Studios. And similarly across the London session scene. Certainly a lot of musicians ended up becoming Wal's official design consultants - John G Perry, Rupert Hine, Pete Zorn and a host of others... However, in those early years only two of their muso friends actually became "official" endorsers of the brand through appearances in formal advertising materials. And the guys couldn't have asked for two more respected and influential spokespersons than John Entwistle from The Who and Percy Jones the Welsh Wizard who played the fretless bass for Brand X.

Both John and Percy had been purchasers of the early JG Series basses but it was propounding the Pro series that they appeared in print. 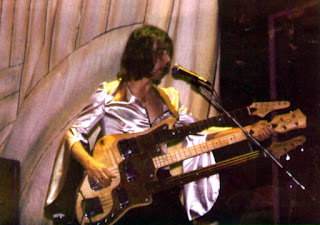 The latter weeks of 2015 and the first few of 2016 have been a sad period for the music world, with so many great musicians from the heydays of 1970s rock passing away over a short period of time. So it was with great sadness that I read only a few days ago of the passing of bassist Jimmy Bain. A member of Richie Blackmore's Rainbow, Dio and Wild Horses and a collaborator with the likes of Philip Lynott and Gary Moore his distinctive bass playing and songwriting was embedded within the hard rock landscape of the late 1970s and early 1980s.

His passing, reminded me of an article from the July 1980 edition of Beats International which I had picked up a few years ago on eBay. In the article Bain gives his opinion, as an experienced player, on the passive Wal Pro II bass. The article is reproduced below and I hope is some sort of fitting tribute to him as a bass player. Rest in Peace, Jimmy.

Hi-Res scans of the original article can be found here:

What we have here is the second in a range of four basses made and distributed by Electric Wood in High Wycombe (Tel: 0494 442925/6). In all honesty it's one of the most powerful basses I've ever tried out. I normally turn the bass up full and set my Marshall on about 6. With this bass full on, 2 on the Marshall is easily loud enough.
Getting down to details, the head on the bass is very square in design, very sturdy, and fitted with Schaller machine heads which are the best heads for basses you can buy. They're accurate and keep their tuning well. The strings run through metal pieces on the head which keeps them down low for a smooth action.

The neck is a lovely piece of work. The centre section is hornbeam and the outer section is maple. The neck is inlaid with red stripes which are made of a sympathetic wood from the Amazon called mukalunga. It's chosen because it's totally non-porous and remarkably straight. On top of all this lies an Indian rosewood fretboard which is shipped from Bombay to Germany. In Germany the wood's cut (Germany have the best cutting equipment) and it's then shipped to England.

This post gathers together some of the obituaries for Ian and Pete which were published in the music press. There are three here, two for Ian (from the UK's Guitarist Magazine and the US Guitar World magazine) and one for Pete in the UK's Bass Guitar Magazine. If my memory serves, I am aware of one more which marked Ian's passing and was published in the UK's late, lamented musos' free-sheet, "Making Music" but my copy of that vanished many years ago...

A History of Wal Basses - The Movie 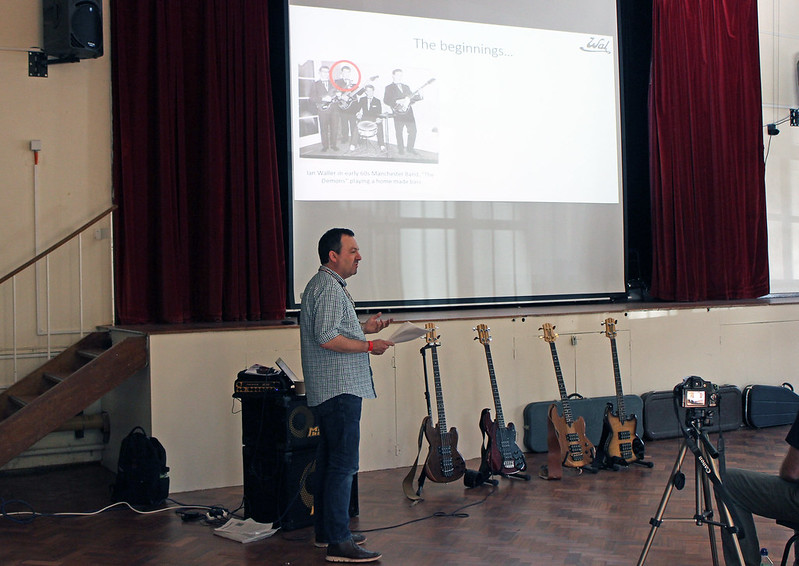 Of all my favourite memories of 2015, one of the longest lasting will be a Saturday in September spent at the "Basschat South East Bass Bash 2015". This was a gathering of members of the fine discussion board, Basschat - a fine place to hang out and talk about all things bass. And indeed, it was a fine day to hang about with some like-minded bass players, shoot the breeze, check out each others' basses and generally geek out. I'm not going to blog about the day itself because that job has already been done brilliantly by the music blogger, Bluejay, also a keen Basschatter.

But I wasn't just there to shoot the breeze. The main reason that I as there was that I had been invited to give a talk about Wal basses - a run through the history of the brand. Alongside my own two Wals a number of other attendees had brought theirs - a lovely Wenge Mk 1 Custom and a Reissue Pro bass which had been retrofitted by Wal with Custom Series bass pickups and controls - a truly unique bass. The talk gave me the perfect opportunity to tell those assembled about the history of the brand and to demo a few of the qualities which make Wal basses so unique.

Fortunately, Bluejay also video'd the talk and posted the it on YouTube for posterity. So here, for your viewing pleasure, a trilogy in four parts of "The History of Wal Basses". Here is the first of the four videos...