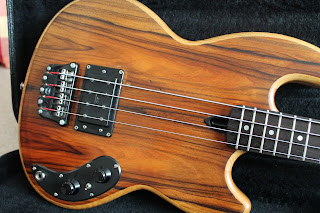 One of the great things about a brand like Wal is that a mix of two inquiring minds and a laissez faire attitude to “standard models” throws up a whole load of interesting basses to scratch your head about. One such bass cropped up recently in an online discussion on Basschat. The then owner, Gary Mackay, offered up his 1983 reissue Passive Pro bass as an unusual example of the model. The history of the Pro Series deserves, perhaps, a little unpacking as its history isn’t necessarily straightforward.

The original Pro Series was the first standard model of Wal bass and was offered between 1978 and 1981. They offered four options – single or dual pickups and active or passive circuitry – solid ash, paddle headstocks, contoured bodies and large black scratchplates. These basses were superseded with the introduction of the Mark 1 Custom in 1981. The Pro Bass was no longer offered for sale.

However, realising that their new Custom Series were effectively luxury models Electric Wood saw that there was a space in the market for a budget Wal. But how to cut costs without cutting corners? The Reissue Pros feature a more or less standard laminates Wal neck but a slab, solid ash body and a single passive pickup (either in the bridge or neck position – the position changed over time) controlled via a small, tear drop-shaped control plate.

As a little extra bling they were often finished with a fairly plain flamed or birdseye maple veneer (and a sunburst finish to hide the veneer’s edge). Gary’s Reissue Pro, however, if the only one I’ve ever seen with a rather tasty, pale rosewood top and clear varnish. All in all a rather classy set of appointments for a supposedly “budget” bass.
Read more »
Posted by TrevR at 22:14 2 comments: 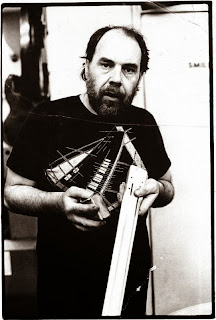 Over the last half a century some incredible bass guitars have come from these shores. From the “yeah baby” grooviness of Burns, to the quirky ergonomics of Shergold, from the Alembic influences of Jaydee and John Birch to the macho 80s lines of Status… all classic designs in their own right. However, perhaps one other British bass stands shoulder to shoulder with them – the instruments made by Electric Wood in High Wycombe: the Wal bass. For much of the 1980s and 1990s a Wal was the must-have bass de jour for the discerning British session player and attracted a wide range of celebrity endorsees (all of whom shared one characteristic… they’d bought their own Wals - the company had a “no freebies” policy). A few years ago the brand ceased production when ill health forced the retirement of founder Peter Stevens. However, in the hands of luthier, Paul Herman, Wal has recently re-emerged so perhaps it’s perhaps an appropriate to have a look back at the birth of the brand. We’ve gathered together some of the characters who were instrumental to the story and picked their brains on those early years.

Ian Waller was an enthusiast. A bass enthusiast and an enthusiastic tinkerer. From an early age he was adept with his hands - playing in bands around the early 60s Manchester scene and building instruments and pedals to power his own music. It’s a matter of record that, with US trade embargoes biting, the availability of decent instruments in the early days of the UK beat revolution was low. Many aspiring players plumped for lower cost alternatives like Hagstroms, Dallas Arbiters and Grimshaws. Others such as "Big Wal", as he had become known around the scene, went for the home-made route. Other members of those early bands recall him as a popular figure on the circuit, the quality of the bass he had made with the assistance of his father always drawing gasps of admiration from jealous musos. 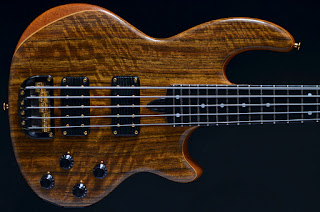 The Wal Midi Bass has always been a bit of a rare beast. So when one turned up for sale at Bass Direct in Warwick with a sumptuous shedua/hydua top, a Mk II 5-string body and some stunning photos attached it seemed like the perfect excuse to feature this beautiful bass on the blog. Many thanks to Mark Stickley at Bass Direct for permission to use these photos. Whoever ends up purchasing this bass is in for a rare treat!

MB4s were on the more obscure and exclusive end of the Wal catalogue and were only available for a limited period of time. That said, over that short period from around 1990 they gained a reputation for being just about the only midi-bass that actually worked.

That was largely down to the genius electronics provided by Australian Steve Chick. The stroke of genius was to remove the need for the bass to midi converter to rely on a hexaphonic pickup to sense the pitch of the note being sounded. The beauty of a keyboard synthesiser is that the keys are effectively just switches. As soon as they are "on" they are "on" - there is no delay in getting them engaged. Hex pickups, on the other hand, take a few cycles of the note to sense what note is being played. For the loser notes on the bass that could potentially take more than a tenth of a second. Definitely noticeable for the listener, positively off putting for the player. Add to that the potential that overtones in the note could be interpreted as an entirely wrong note. For this reason midi basses gained a reputation for being tricky to play and badly glitchy. At the very least they demanded a very precise playing style.