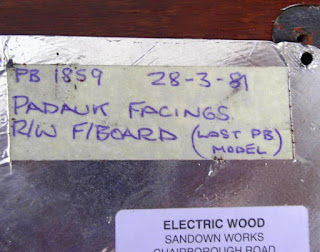 Fine instruments though the Pro Series Wals were Ian and Pete were not content to rest on their laurels – still eager to fulfil their vision of the perfect bass guitar.  This took a step forward in 1981 as the Pro series basses were phased out and replaced by the “Custom Series” – the staple Wal range (with some tweaks and additions along the way) to this day.  In this transition phase a number of basses were built with "Pro bass" serial numbers (starting with PB) which were to all intents and purposes Wal "Custom Series" basses.  These Wal equivalents of the Fender "Nocaster" still cause confusion over the nature of the Pro series to this day!  The "last ever Pro" bass (PB1859), completed on March 28th 1981 was just such a transitional bass!  Subsequent basses started with a W serial number - presumably W1860. 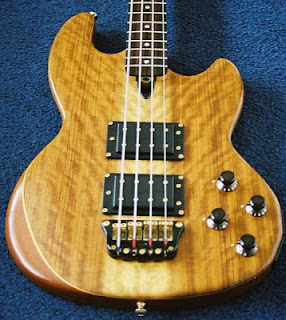 The "Custom Series" dispensed with the Pro series' scratchplate - surface mounting the pickups and controls - and replaced a solid ash body with a mahogany body core faced with a selection of exotic woods.  As much as you can ever have a "standard" range with a builder which takes such a custom building approach as Wal, the standard woods used for the facings are paduak, wenge, American walnut or hydua/schedua.  Pete always maintained that for fretless basses walnut was the premium wood to use. He felt that the tonal properties of the wood best complemented the unique sound of the fretless bass. Indeed, among fretless players the Wal sound remains very highly regarded. 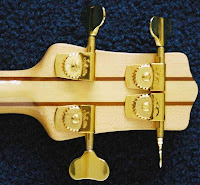 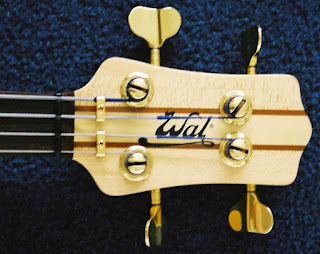 The new necks for the Custom series were similar to those of the Pro series - 34"/864mm scale length and 21 frets but with a slimmer headstock allowing straight string pull over the nut.  Biggest change, however, was probably to the electronics.  The standard package was now twin pickups with a powerful active circuit offering volume, pickup pan and separate tone controls for each pickup.  The volume included a push/pull knob which also activated the "pick-attack" feature.  This adds a narrow band of high frequencies to the overall tone setting to provide a more dynamic, percussive attack - ideal for helping the bass cut through a muddy live mix.  The tones are low-pass shelving controls governing each pickup.  They also each have a push/pull switch which engages an active boost (quasi-parametric) giving a more distinctively "active" tone.  A balanced XLR output comes as standard on all "Custom series" basses.  A choice between chrome and gold hardware was now also available. However, the chrome bridges from the Pro basses were replaced with a similar bridge in powder-coated black - matching the control knobs.

Alongside the new Custom Series Wal produced a short lived new version of the Pro bass. This new version was intended to be a stripped down, entry level Wal bass. However, these new Pros were still classy affairs which featured many Wal characteristics. Single pickups were placed by the bridge with a simple passive wiring loom mounted on a tear-shaped plastic plate while the bodies usually featured exotic wood tops and attractive sunburst finishes. Soon phased out again they reappeared briefly in the early 1990s. For more info see here.

In March 1986 Wal introduced a 5-string bass with a 24 fret neck and a revised body shape (Mark II) which was also applied as an option to the 4-string basses (although a few selected friends received theirs late the previous year, notably Laurie Cottle and journalist, session player, Wal demo artist and tutor, Robbie Burns). This Mark II body shape included  more asymmetric body horns with an extended upper horn.  This significantly increased the mass of the body.  In addition the included 24 frets and a revised headstock shape). Alongside the Custom Series basses, Wal started to produce the odd double necked bass. This was sparked off by a special commission in 1984 from virtuoso bassist, Jonas Hellborg. His was the first Wal double neck and became synonymous with him throughout the 1980s.

Tragically, Ian Waller died suddenly of a heart attack in 1988 and his passing was marked across the music industry.

Despite this irreplaceable loss, Pete Stevens was determined to carry on Ian's legacy and continue building world beating basses.You can read more detail on Ian's tragic death on the "Special Feature - Wal Basses, The Early Years" pages (to be added in due course).

Through the course of the 1980s, the Wal Custom became a staple of studios and stages throughout finding favour with artists as diverse as Paul McCartney, Dire Straits, Jonas Helborg (for whom he built an early double neck model), Spandau Ballet, Mick Karn of Japan and Geddy Lee of Rush (at least two Wals even appeared on stage at "Live Aid" in Wembley Stadium in the hands of Martin Kemp of Spandau Ballet and John Illsley of Dire Straits).  The bass line on the original "Band Aid" single, "Do they know it's Christmas" (one of the biggest and most influential singles of all time) was powered by Wal.  By the end of that decade it was being considered by many as the "industry standard" for studio basses.

The original "Custom Series" design (Mark I) of four control electronics and a mahogany/exotic wood laminate body has since formed the template for all further developments and versions of the Wal Bass. An interesting aside in the history of the Wal bass it the MB4 midi-bass. In the mid 1980’s an Australian bass player called Steve Chick, frustrated with what was already on the market, decided to develop a working bass synth system which combined accurate note tracking with immediate sounding notes.  He hit on the perfect solution to solve the “midi delay” dilemma – the almost imperceptible (but still noticeable and distracting) delay caused by the time taken for the midi hex pick-up to sense the note being played.  His system did not rely fully on the hex pick-up for pitch information.  Instead, sensors were built into the frets (each of which was split into four separate pieces) to determine the basic pitch of the note. 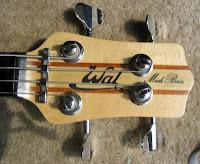 Around 1990 the Wal MB4 Midi bass was launched to much acclaim - mostly because it actually worked without the delay which had plagued other midi-bass systems.  Unfortunately, after only a few years, the rights to Chick's midi-bass was bought up by US guitar giant Peavey for the development of their Midibase and then Cyber-bass.  This brought an end to the production of the Wal MB4 midi-bass. These remain sought after items on the second hand market.