Now, he may not have the international mega-star profile of some other Wal players like Flea, Macca, Geddy and co but Rob Burns, nonetheless, occupies a pivotal role in the story of Wal basses.

Now a lecturer at the University of Otago in New Zealand, throughout the '70s, ‘80s and ‘90s he was a first call session player and a recognisable face across the London and UK rock and jazz circuits. His CV includes playing with David Gilmour, Pete Townshend, Eric Burdon, Jon Lord and Ian Paice, James Burton, Albert Lee and Jerry Donahue. He played with Morrissey-Mullen, Zoot Money and spent time in a number of prestigeous West End orchestra pits (including being personally chosen by Pete Townsend to play bass for the 1979 revival of the Who's "Tommy").

Rob played on television soundtracks for shows such as Blackadder, Mr. Bean and Red Dwarf - becoming a regular member of composer Howard Goddall's "TV sound-track band". He also provided the bottom end for a plethora of TV commercials. 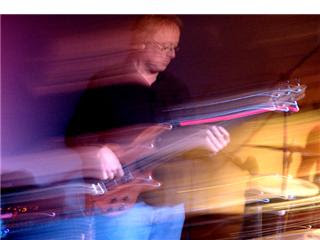 As if that wasn’t enough he was also a huge proponent of Wal basses both as a regular demonstrator for Musician’s Union clinics and roadshows and as the lead bass writer and reviewer for the UK’s premier guitar mag, “Guitarist”.

Funnily enough, Rob was the guy who originally turned me onto Wals back in about 1987 or so (although it turns out that they were already played on a host of my favourite tunes. Wal bass sounds were scattered liberally across my teenage record collection, I just didn't realise at the time that I was regularly listening to Wal basses!). I caught Rob’s demo of the brand new Marshall Jubilee series bass rig at the London Guitar Show in Olympia and was so blown away by his playing on his two Mk 1 Wals that I came back to see every one of his demos through the day. He was a pleasure to talk to and awfully patient, indulging the gazillion questions I asked about a piece of gear he wasn't actually there to promote.

He recently mused back on some of his early associations with Wal.

“I remember the first Wal 4 string I bought and Ian saying that I would 'grow' into it. He was right, it changed my playing for the better. I had a wonderful choice of basses that day but eventually settled on what I think was called 'Shedua'. It was a solid body (not what they called a 'sandwich') and it was the one I used on a lot of early 80s BBC stuff and while touring with Eric Burdon.

The bass had a beautiful grain, that shimmered under the light, a rosewood board and the eq we are all used to. What also helped was my Trace rig, a fantastic combination. I then got a fretless 4 string made from ‘Paduak’; the wood was a deep red colour with random white splotches through it. Ian said that, again, I would need to play it in to get what he called 'rutting' on the ebony board to get a fretless growl from it. As always, he was right.


“Ian gave me so much advice on how basses would age, he gave my father (a wood sculptor, and I have carvings by my dad made from parts left over from Mick Karn's basses with me now) as well as many other rare off cuts from which my dad created woodcarving art.”

Later on, Rob was almost first at the door to try out a new Wal innovation, a 5 string bass. “My own one was number 3 and it's still my main bass. Laurence [Cottle] had the first two but they were severely damaged in a car crash (I heard) so I think mine is the oldest [surviving] Wal 5 string.

“I should have added that Pete and Ian wrote a very nice message to me on the inside of the back plate of my five string along with the date (some time in 85) and all the woods used etc. Gives it a nice personal memory for me. [see photo above] Still records like a dream. 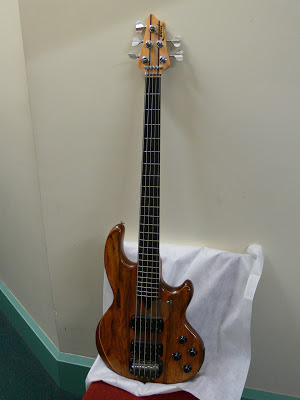 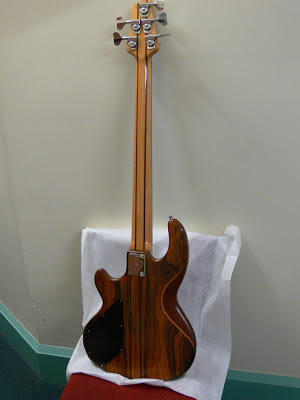 “That bass did Red Dwarf (it's been on every series), Mr. Bean (series one), Alas Smith and Jones, Lenny Henry, Three of A Kind, 2.4 Children etc. (loads of BBC stuff, although Not the Nine O'Clock and Blackadder were on my Wal four string). Plus it’s done more jingles than I can remember.

“I should have been like Carol Kaye and kept a diary! Laziness on my part. It was my workhorse on gigs with Gilmour, guys from Brand X and Fleetwood Mac, Gambale and the great Jerry Donahue. For the James Burton gigs I had to use a very mediocre Fender five, but they have upped their game seriously since 1993/4. It's been on three Verlaines albums and two Subject2change (NZ) albums in NZ. And that's why I love it!

“By the time I got the 5, I had been doing MU clinics for a few years so I was desperate to get out and use it. I tried it on a few covers gigs first and fell foul of the 'mixed up Cs and Fs' syndrome but, by the first recording session, I had it more or less sorted. What I did do though was spend too much time down the deep end to the point where the producer had to ask for some higher notes as well! I used it on Red Dwarf and the low C at the end of the theme song was originally written an octave higher. I was surprised that the BBC engineer made it audible on the then tiny TV speakers.

"Interestingly, the santos rosewood back and front have become lighter over the years and there are a few lacquer cracks on the back of the neck (which has always remained stable). When I got it out of its flight case on arrival in NZ, it was still in tune! Ian said the colour changes would happen over the years, and, as always, he was right.

"It was looked after by Pete with a service annually until I left the UK and I really enjoyed seeing Pete at Christmas every year to catch up and talk Wal bass, lovely man. I have had to have one refret (I kept the old ones for nostalgia's sake - I'm a sad git) which was done by a great luthier called Steve Barkman in Dunedin, where I now live. The bass has a few dings but that's expected I suppose, it does get used a lot.”

The affinity which Rob feels for his 5-string bass is clear so it’s no surprise that he was keen to share with the world just how good it was. The perfect opportunity came from his “other” job as bass correspondent for the UK’s “Guitarist” magazine. The following review is, unsurprisingly, glowing: 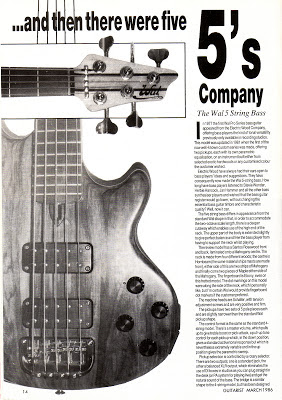 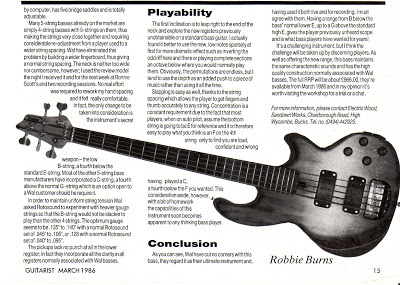 Hi-res versions of the review can be viewed at this link...

However, the 5-string isn’t the only special, landmark Wal which he owns. He’s also the proud owner of the first ever Wal 6-string bass – the bas which heralded the introduction of the Mk III body shape. As with most Wal “testbed” basses it’s a little unusual and non-standard. Its body is solid ash although the rest of the specs are as you would expect from a Wal 6-string. “Pete gave me this six string in 1994 or 1995 (to my shame I can't remember). He said it was a prototype and was a Christmas gift for the Wal promotion I had done for Electric Wood over the years on the MU clinics. I could never thank him enough.”