The Beginnings... (The Triple Neck and JG Series Basses)


Wal basses are hand-crafted bass guitars produced since the early 1970’s by Electric Wood in High Wycombe, Buckinghamshire in the UK. Since then they have come to be regarded as the standard by which others are judged on concert stages and recording studios across the world.

This page gives a run-down of the history and development of these wonderful instruments. For more info on the design specifications of different Wal basses, photos of some famous (and just plain odd) Wals and other stuff visit our "Specifications" and "Oddities" pages. Elsewhere you will find information on how to date your Wal bass.

The story began in 1973 when an amateur luthier called Pete (“The Fish”) Stevens began collaborating with Ian Waller, an electronics expert, to build what they considered to be the ultimate in bass guitars. Ian had been a respected bass player around the early '60s music scene in Manchester known as "Big Wal" - closely missing out on playing bass in chart-topping pop band, Herman's Hermits. When his band, "Remo Sands and the Spinning Tops", failed to make it big Ian made his way to London to exploit his other skills - electronics - working, amongst other things in the film industry. In his Manchester days he had regularly built pedals and other gizmos for his various band-mates and as a teenager he had built a very respectable P-bass copy with his father.

Pete had been working in the exotic fish importing business – hence his unusual nickname – but a downturn prompted by the early ‘70s oil crises and the temporary closure of the Suez Canal led to him working at the Farmyard rehearsal studio which was run by drummer Trevor Morais and driving the famous "Rolling Stones Mobile" studio. While working at the studio he met and became friends with Ian Waller.

Initially working on a custom only basis they began building basses for some of the best known players on the London session scene of the time under the name “Electric Wood”. Trevor Morais’ contacts proved to be invaluable in building up contacts – at the time he was setting up the jazz rock band “Quantum Jump” (which also featured later Rush producer, Rupert Hine). Through these contacts the first ever Wal bass was commissioned by John G Perry, a session pro, bassist for Quantum Jump, Caravan and later Curved Air and the in-house bass player for Redan Recorders and Triumvirate Productions.

The first ever Wals.


Perry was a busy session player and wanted a bass which could cover all the types of tone which a session might demand - both the rounded, plummy tones of his Gibson and the sharper, more cutting tones of a Fender bass. A design was settled upon which attempted to meet this criteria while retaining the short-scale feel with which Perry was familiar. The bass, dubbed W1111, was a short scale (30 ¼”), ash bodied bass loosely based on Perry's Gibson EB3 bass, although with a more smoothly rounded shape, perhaps with a hint of a Fender Mustang.

The hardware for W1111 was culled from a variety of sources. The bridge, switches and knobs came from a Gibson. The pickups, hand rewound by Ian, were sourced from an old Guild (humbucking for a Gibson-like tonality) and Fender Mustang (single coil for the Fender sounds). The machine heads were stock Schallers. The most visually striking aspect of the bass was the scratchplate made of hand tooled leather on a metal screening plate.

Clearly a prototype, many of the design elements which would go to make up the early early "JG" and later “Pro” series and Mark I Custom Wal basses were already in evidence. The bass was passive and suffered some matching problems between the two, very different, pickups but in a studio context where different sounds could be set up as required this was not an issue. Even with its idiosyncrasies, the bass has a very pleasing sound
and has something of the sound of a Wal about it – presumably partly due to Ian’s hand rewinding of the pickups.

This bass became one of John G Perry’s main basses for the rest of the decade and both its look and sound drew much interest from John’s bass playing colleagues. It can be heard on albums such as “Visionary”, “Perilous Journey”, “Fear of the Dark” and “Peacock Party” by the Gordon Giltrap Band (available from www.voiceprint.co.uk and from retailers such as Amazon).

As an aside, the W111 was stolen from John G Perry’s car a few years later. However, in the early 1990’s Pete Stevens was able to reacquire it after a dealer in Cornwall recognized the real significance of a bass being offered for trade. Now it resides in its rightful home in the rack of basses at the Wal workshop.

However, Electric Wood’s next commission was, if anything, perhaps their strangest. Roger Newell had recently been recruited as bass player in Rick Wakeman’s band the “English Rock Ensemble”. He soon came to realize that to compete with playing for Journeys to the Centre of the Earth and "King Arthur on Ice" he would need a bass that was a little bit different. Ever the showman, Rick agreed. He knew that there were other progressive rock bans with twin-neck basses so his band would have to have a TRIPLE neck bass. In 1974 he commissioned Ian 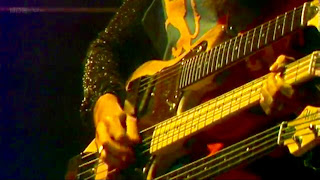 and Pete to build Roger a triple necked bass guitar. This bass would feature a conventional four-string fretted neck, a four string fretless neck (both tuned EADG ) and a short scale six string neck guitar neck (this has since been reset to feature three courses of double strings tuned ADG in octave pairs). Again the hardware came from a variety of sources, Schaller guitar and bass tuning pegs, custom made Fender style bridges and pickups with chrome covers culled from Fender Mustangs and a Fender Telecaster. Like W1111 it features the leather scratch plate which would be a Wal signature until the first production, “Pro” series, basses were launched in 1978. The bass debuted for the concerts to promote Wakeman's "The Myths And Legends Of King Arthur And The Knights Of The Round Table" album.

The Triple-Neck can be seen in the following video of "Arthur" from the début performance of "King Arthur" at the Empire Pool Wembley in 1975. This was the first public showing of the bass - it can be seen at approx 5:17 and 6:04


The full bass is again briefly visible around 3:11 and 5:08 in this video of "Guinevere" from the same concert.

This bass was later given by Wakeman to Chris Squire of Yes (to Newell's understandable annoyance!) and the chrome bridge and pickup covers disposed of. It came to fame on the Yes track "Awaken" and it is currently on loan to the Hard Rock Café in New York. Strangely, although Squire still regularly plays a Wal triple neck on stage for extended versions “Awaken” that bass was not made by Wal but is, rather, a replica built for him by a Japanese luthier, Hiroshi Kid of Tokyo's "Kid Guitars". The photo of Roger Newell above is the original, Squire (below) is the replica.

Here Chris chats about his replica and the original (starts at 6mins and 9 seconds)... 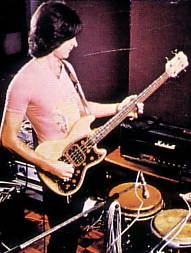 More commissions followed (44 custom basses in all). The next customers were John G Perry (again a short scale model) and John Gustafson (of the Merseybeats, the Ian Gillan Band, Episode Six, the Big Three, Quatermass and Roxy Music) whose name was the basis of this series of basses - the "JG Custom" series, Pete Zorn, and a host of other session players. The first built was a 32" short scale version for Perry with the serial number JP1111. The JG basses featured a full 34" scale length. The basses were made on a semi-custom basis and were characterised by their distinctive leather tooled scratchplates. These scratchplates often featured flower designs as on John Gustafson's fretless bass (JG1131) pictured above. However, some featured plain leather scratchplates - as on the JG Series bass, JG1147, (pictured below) which was formerly owned by Gary Tibbs while he was in Roxy Music. The Who's bassist, John Entwistle, also ordered a JG bass and later appeared in advertising literature for the "Pro Series basses". 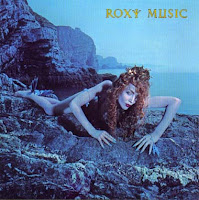 The Roxy Music connection to Wal basses is strong, as many of the bassists who have wandered through the ranks of the band were Wal players. The links to the band go right back to the earliest days, though. Gustafson was first introduced to Ian Waller by a mutual friend in the very early 1970s. Gustafson commented on that first meeting and the fruit it bore.

"Wal was talking about basses and I became interested. He asked me what I would like in a bass. I was playing a Fender Jazz at the time, the first thing I suggested was an extra fret as the Fender only went up to E flat on the G string. I loved the Jazz neck at that time and I wanted something with a similar width and with a sculpted back for a more comfortable position.” Unsurprisingly the bassist was tempted and an order placed. “I bought a hybrid from Wal: a precision neck with a Wal body, the leather scratchplate was Wal's surprise. It was a great bass which I used until I picked up the JG model.”  That hybrid bass became Gustafson's staple instrument through the following years – including numerous sessions and a stint as the studio bassist for Roxy Music. This lead to it featuring on a range of classic 70s tracks, including providing the iconic bass line for ‘Love Is The Drug’. “Yes, it is the green hybrid on Roxy Music’s Siren, including ‘Drug’.”

Early users who all contributed to the technical development of the bass were players of the likes of John Entwistle, Pete Zorn, Rupert Hine and Percy Jones of the jazz-rock band “Brand X” (John Entwistle's photograph also featured in some early Electric Wood adverts). It was over this period that Ian strove to perfect the electronics which would form the foundation of the signature Wal sound.


Special feature on the beginnings of Wal Basses, including interviews with some of the key players in the story (John G Perry, Rick Wakeman, Roger Newell, John Gustafson...). 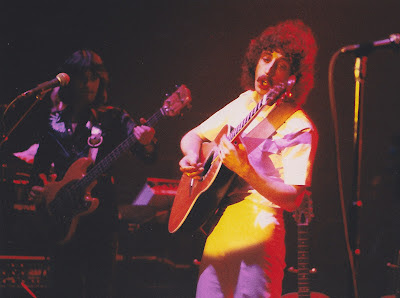 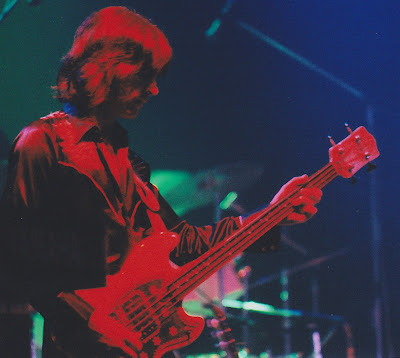 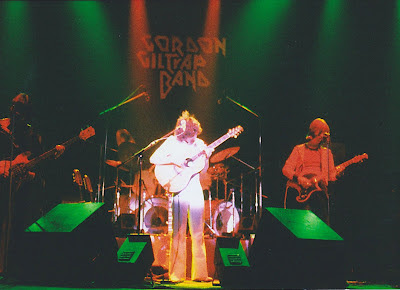 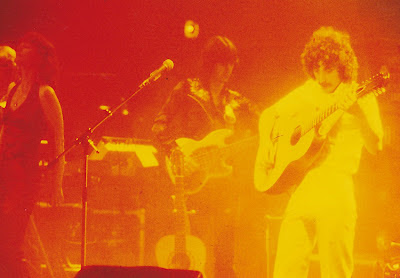 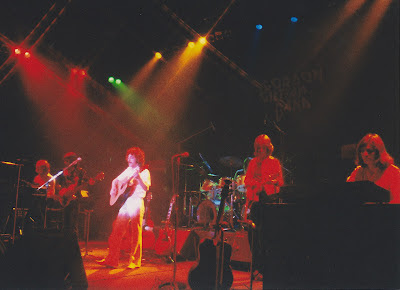 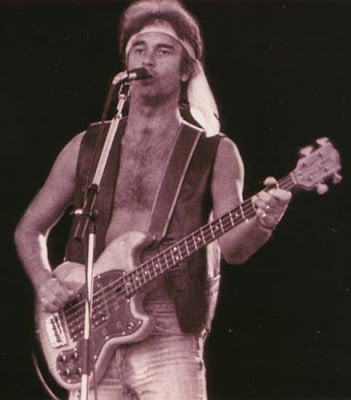 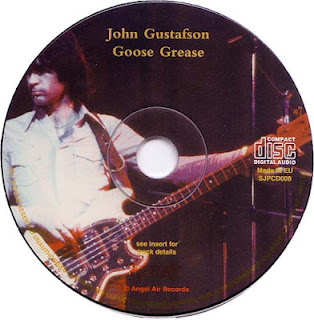 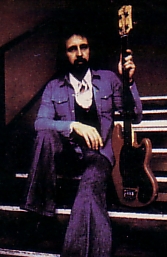