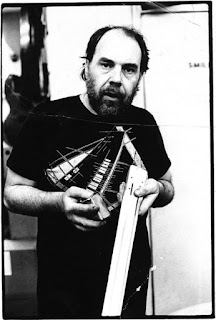 The Wonderful World of the Woods of Wal – Part 1, Necks

In Ian Waller and Pete Stevens the early 1970s cooked up a perfect recipe for bass guitar building creativity. A perfect storm of bass playing experience (in Ian's case), innovative design skills, inquiring minds, guitar building experience, woodworking skills, affability, electronics savvy and connections within the industry. Given those factors it's no surprise that something magical happened.

And there are plenty of anecdotes highlighting their skill with a chisel and a plane. Stories of Ian sizing up a job (refitting a recording studio) by eye and still perfectly dovetailing together complicated elements in perfect harmony. Ian, in particular clearly had a strong affinity with wood as a material and a living theme.

In a recent blog on his own site, The New Colloquium, http://thenewcolloquium.com/wal-bass-neil-finn-me/ Paul Phillips outlines his memories of Wal. "...Ian, on the other hand, was a bit of an electronics genius and also built guitars. Everyone called him Wal (his name was Ian Waller). He made the legendary Wal Bass... 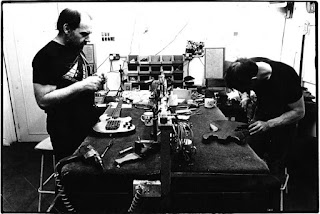 "...When I met him, he had already built his own acoustic bass guitar, the first I’d ever seen. It was huge, and beautiful. At one point, George Harrison coveted it, but Wal wasn’t keen. I think he’d rather it went to a bona fide and great bass player.

"He started studying wood and how it aged, and dreaming up the design of the Wal Bass. To me, wood was wood. But then Wal showed me some birds-eye maple and made me study it as he saw it. I never – to this day – looked at wood the same way again."

Given this it's no surprise that beautiful and unusual woods became an integral part of the Wal story. In this first part of the blog we will look largely at neck woods, focusing on bodies in the next blog. 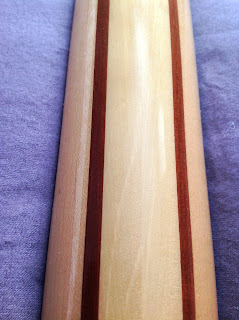 At the beginning of the brand, though wood choices were somewhat more modest. Solid ash for the bodies. Necks made with a mix of hard rock maple and English hornbeam. Rosewood for the fingerboards. Ebony was sometimes employed for a harder more durable fingerboard, especially with fretless basses. All well respected hardwoods well known for their tonal properties and often used for guitar and bass building. Well, except for the hornbeam - an exceptional domestically sourced hardwood with good strength and warping resistance but a quirky choice for bass building.

Part way through the run of the early JG basses an additional wood was thrown into the mix as the tropical hardwood "mukulungu" was added between the maple and hornbeam laminates in the neck. This created the now classic striped look of Wal necks and headstocks. Later on the mukulungu was dropped for the more easily available mahogany while the hornbeam in the centre laminates gave way to the rock maple already used for the outer laminates.

With the introduction of the Custom Series basses everything changed and Wal stepped up into the ranks of what would later be known as "boutique basses". The Custom Series retained the same laminate neck construction (although with a streamlined headstock shape) but the construction of the body was very different. This time a sandwich of different (often exotic) hard woods was employed. 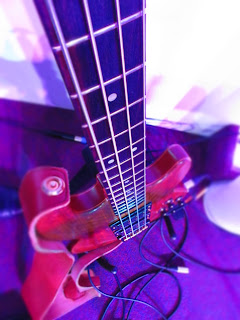 There is much debate among guitar fans on the contribution which different woods make to a guitar' sound. "Absolutely none at all." would be the starting position for some. However, most luthiers would probably say that different woods will add different flavours to an instrument's core sound - albeit that it is not a linear relationship. Wood is an organic material and, as such heavily influenced by its growing environment. Different pieces of wood from the same species, or even from the same tree can have variations in their internal structure which will affect how they resonate. A telling comment from Paul Herman on the topic, "You mustn’t forget that the density and grain structure can vary even from one end of a single board to the other. There can be a lot of variables even on two basses with exactly the same spec."

That said, there are some general principles at work. Most would say that a harder wood with a denser grain structure (like maple or wenge) will tend to produce a brighter, punchier tone that a softer wood such as mahogany or walnut.

So let's have a look at the woods that Wal use themselves... 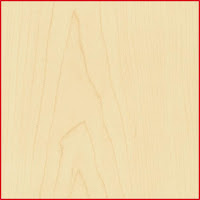 Hard Rock Maple (Acer Saccharum): maple, alongside mahogany (or one of its cheaper equivalents) is one of the most ubiquitous woods used for building guitar and bass necks - just think about any Fender instrument you've ever seen. Or indeed any of the instruments hanging on the wall of your local guitar shop. The wood has many benefits. First of all, as a temperate hardwood still common in many countries it is easily available and relatively inexpensive compared to some others and very stable. It has an excellent reputation both for ease of working and as a tone wood. Also depending on the specific variety used and the nature of the individual piece of wool it can display some very attractive cosmetic properties - from flaming to birds-eye. Its harder, denser grain structure produces a brighter sound than many other woods.

English Hornbeam (Carpinus Betulus): as the name implies, this is an English hardwood. It is dense and stiff with a light colour but is sympathetic to work. This property is also reflected in the wood's name - hornbeam referring to the hardness of the wood (like horn). The alternative name is "ironwood", again reflecting its physical properties. One of many hardwoods sharing this common name. It is an unusual wood in guitar building applications its stiffness and stability nonetheless suits it to neck building and it was used for the inner neck laminates of late JG, Pro Bass and early Custom Series basses. This was dropped in favour of the hard rock maple used on the outer neck laminates because Ian and Pete felt that is added an unnecessary level of rigidity to the necks, given the inherent stability of the laminate structure. The carbon fibre stiffening rods used under the fingerboards of the Pro Series basses were dropped in the Custom series for much the same reason.

Mukulungu (Autranella Congolensis): An African hardwood, mukulungu is probably the most obscure wood used by Wal basses. Native to Cameroon, Congo, Gabon, Nigeria and neighbouring countries, this wood has a range of locally used names (kungulu, elanzok, bouanga, kabulungu, mfua and many more. Mukulungu is the more common Congolese name. It was used for a few years from the introduction of the Mk 2 JG Series basses as the dark tropical hardwood laminates sandwiched between the hard rock maple and hornbeam in the bass necks. After a few years, the exact timing is uncertain it was replaced with the more familiar mahogany still used today. Like mahogany it has a dark brown colour, sometimes with a reddish undertone. As noted above, the reasons and timing of its replacement are not known. However, mukulungu has been listed on the IUCN Red List of Endangered Species as "Critically Endangered", the most serious classification for a species prior to extinction in the wild, since at least the mid-1990s. On that basis, it may be safe to presume that a mixture of increasing cost and scarcity will have contributed to the decision.

Mahogany (Swietenia Macrophyllia): a dark reddish brown hardwood which is considered to give a warm tone, balancing well with the maple in the laminated necks. We'll look more deeply at this species in the next blog on body woods.

Rosewood (Dalbergia species. Brazillian Roeswood - Dalbergia Nigra, Indian Rosewood - Dalbergia Latifolia, East Asian Rosewood - Dalbergia Oliveri): Rosewood is a common wood for fingerboards. It is dark chocolate brown and can either have a very uniform straight grain or show some subtle grey to purple streaming within the grain. It is considered a warmer sounding wood than maple or ebony and is thus often paired with a maple neck to provide an overall rounder tone. This is wood predominately used by Wal for fretted necks. In the past, before 2006, maple fretboards were sometimes offered at customer request. However, this is no longer an option.  Throughout the history of Wal basses the variety of rosewood specified in Wal literature has been Indian rosewood. As ever with Wal basses, though, there are exceptions. Whereas the label inside a Wal control cavity will usually just list "Rosewood" as the fingerboard wood my own Mk 1 Custom specifies "Thai Rosewood". 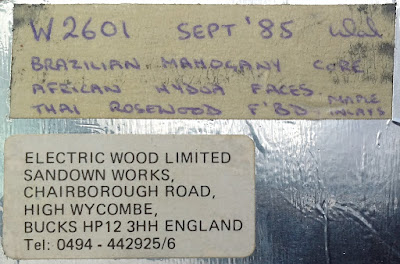 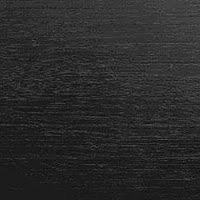 Ebony (Diospyos Melanoxylon/Ebenum): The other wood used by Wal for fingerboards, ebony is typically a very dark, almost black colour with a tight, straight grain. This gives a very uniform look and a very hard surface, particularly suitable for fretless basses. The sound is brighter than Rosewood with a stronger "snap" to it, further enhancing its suitability for fretless. Other varieties, such as Macassar Ebony (diospyros celebica) display convoluted pale and dark streaks within the grain pattern. However this variety is not used for Wal basses. Throughout the history of Wal basses the variety of ebony specified in Wal literature has been Indian Ebony.