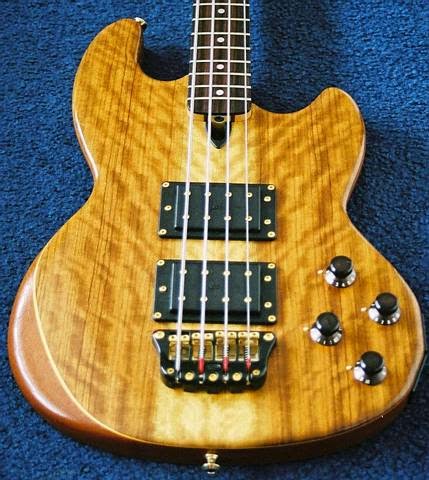 My first Wal was bought second-hand in 1992.  It's a Custom series bass built in September 1985 and signed off by Ian Waller. I bought after seeing it advertised in a small ad in Guitarist magazine. It was in almost perfect "closet classic" condition, having spent the intervening seven years sitting in a cupboard unplayed.  The previous (and original) owner was a jazz upright bass player who had wanted to try out a bass guitar to see what it was like. Rather than splashing out £100 on a Squier or Encore bass to undertake this experiment he purchased the Wal. However, soon afterwards he discovered that he simply didn't get on with the horizontal playing position of the bass guitar and put it away unused under the bed in the spare room.

The bass has, what's known as, the "Mark 1" body style (a development from the body shape of the previous "Pro Series").  The specs are as follows: 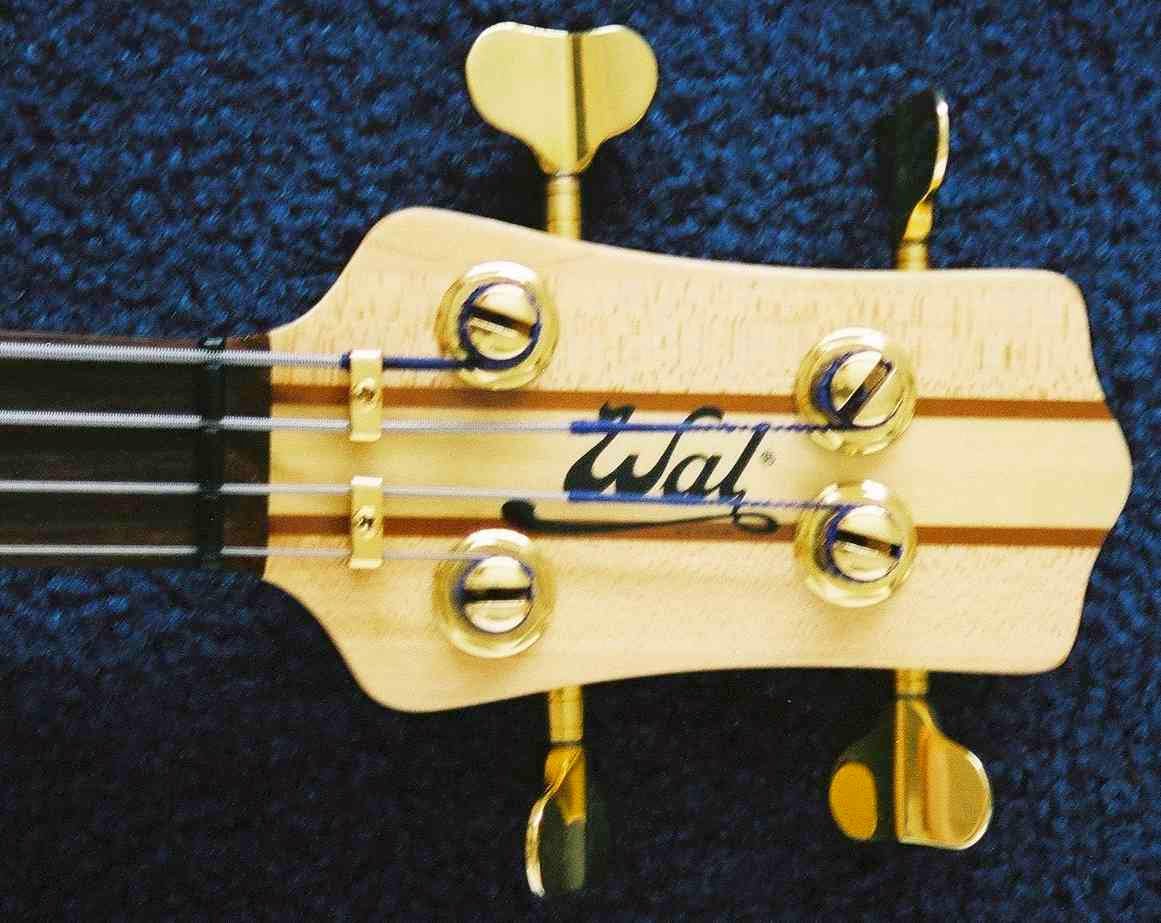 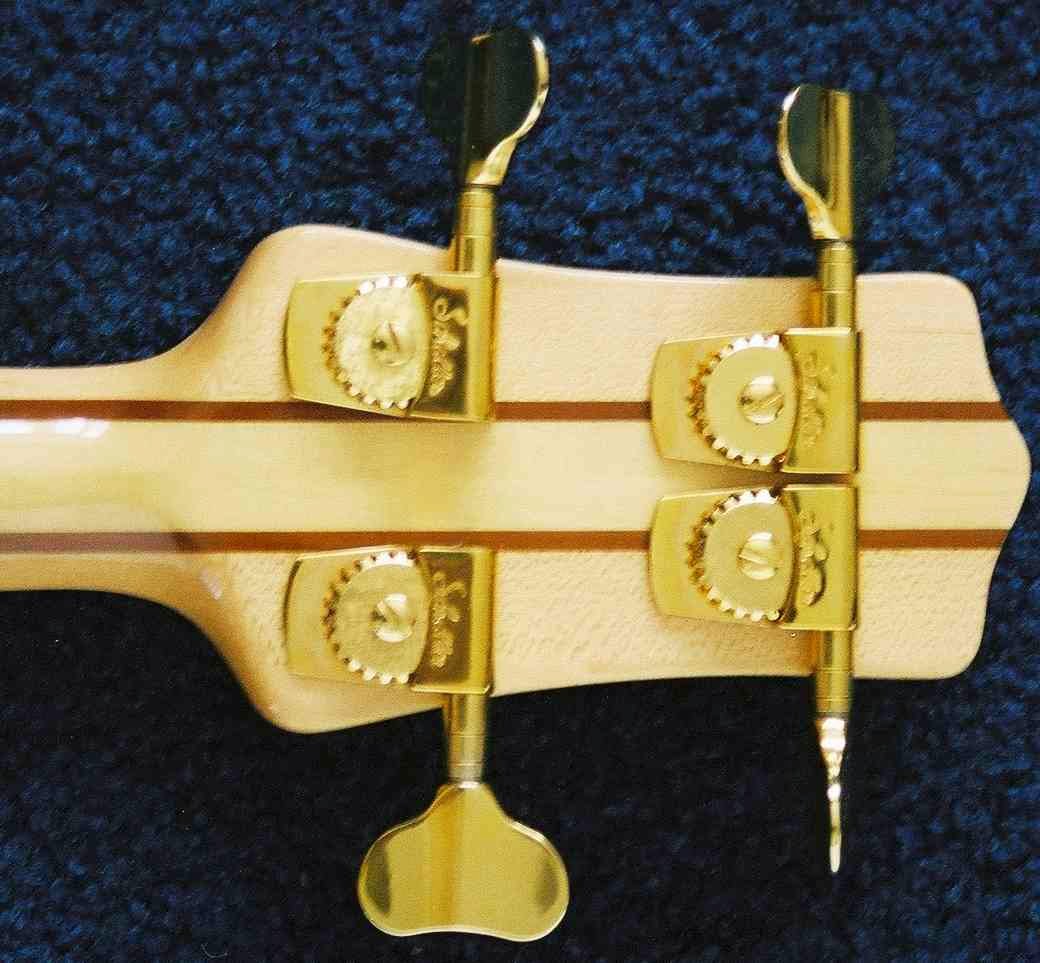 One of the characteristics of Wal "Custom series" basses are their unique pickups and active circuitry which is both versatile and simple to use.  Since then it has been my main bass in pretty much every playing context. This bass can cover just about any style of music you can throw at it and pass with flying colours.  Perhaps not naturally a slapper's bass... but that's not necessarily a bad thing!  As with so many Wals it sports a great punchy, growly bass sound.  There is plenty of bottom end but it is almost naturally compressed. It is a sound which has always elicited complements from any sound engineers I have worked with.  As with all Custom Series Wal basses it even has a balanced XLR output alongside the jack socket - yes, an inbuilt DI box! 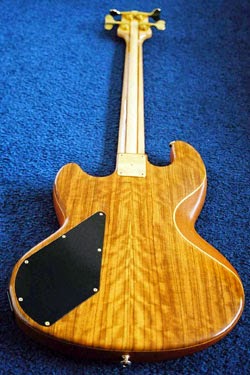 The wood used for the front and rear parts of the body sandwich, shedua (a relation of the more familiar ovangkol), is quite remarkable visually. The wood itself is a golden honey brown with a pronounced grain - which would make for a pretty enough but fairly unremarkable look. However, the wood also features a beautiful yet subtle flaming, rather like wiggly tiger stripes. These are very pretty when seen under lights, particularly under stage lighting when the striping seems to change and undulate as the angle of the light changes.All the time glowing with a rich golden tone. Mmmmm... Another feature of the wood is that the heart wood and sap woods are of different tones - one being significantly lighter. This characteristic has been used to good effect whereby the tops have been bookmatched to create a false centre section through the middle of the bass. This was a favourite trick of Wal and Pete (also employed in a more extreme manner with paduak). More than once, I have been asked whether my Wal has a neck-thru design.

Currently I am mostly playing with in-ear monitoring. The mix of the jack output and the XLR allows me to run the bass signal from the jack output to my backline (originally a 200W Trace Elliott, but now a 500W Markbass amp with either or both 2x10 and 1x15 cabs. Meanwhile I run the XLR to a two channel belt pack mini-mixer alongside the main PA feed. This gives me the flexibility to blend additional bass into my in-ear mix as I need to during a set. Nice!