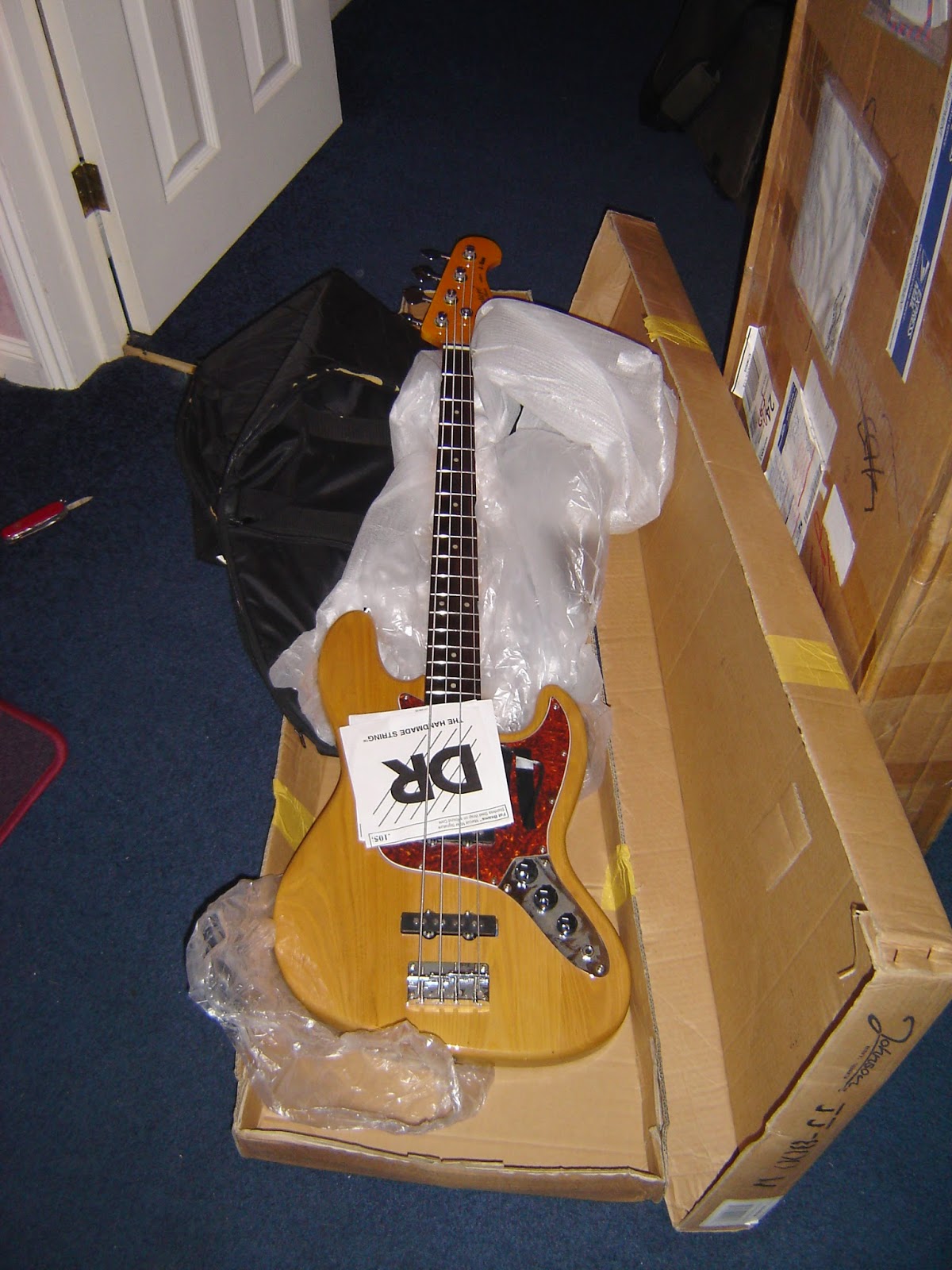 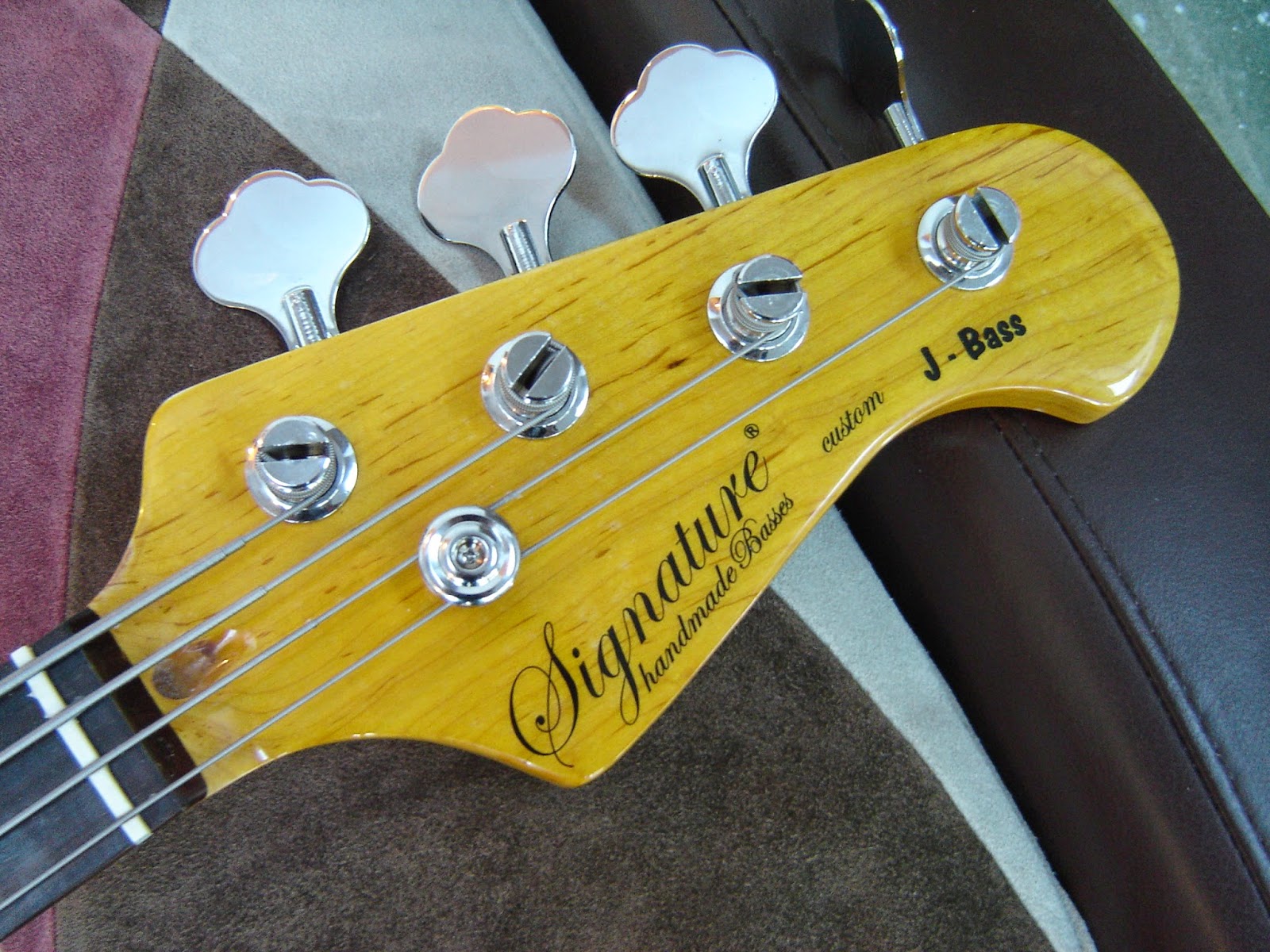 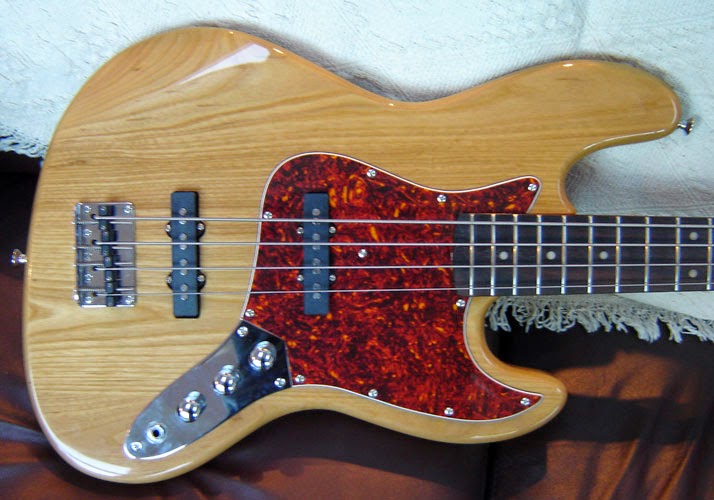 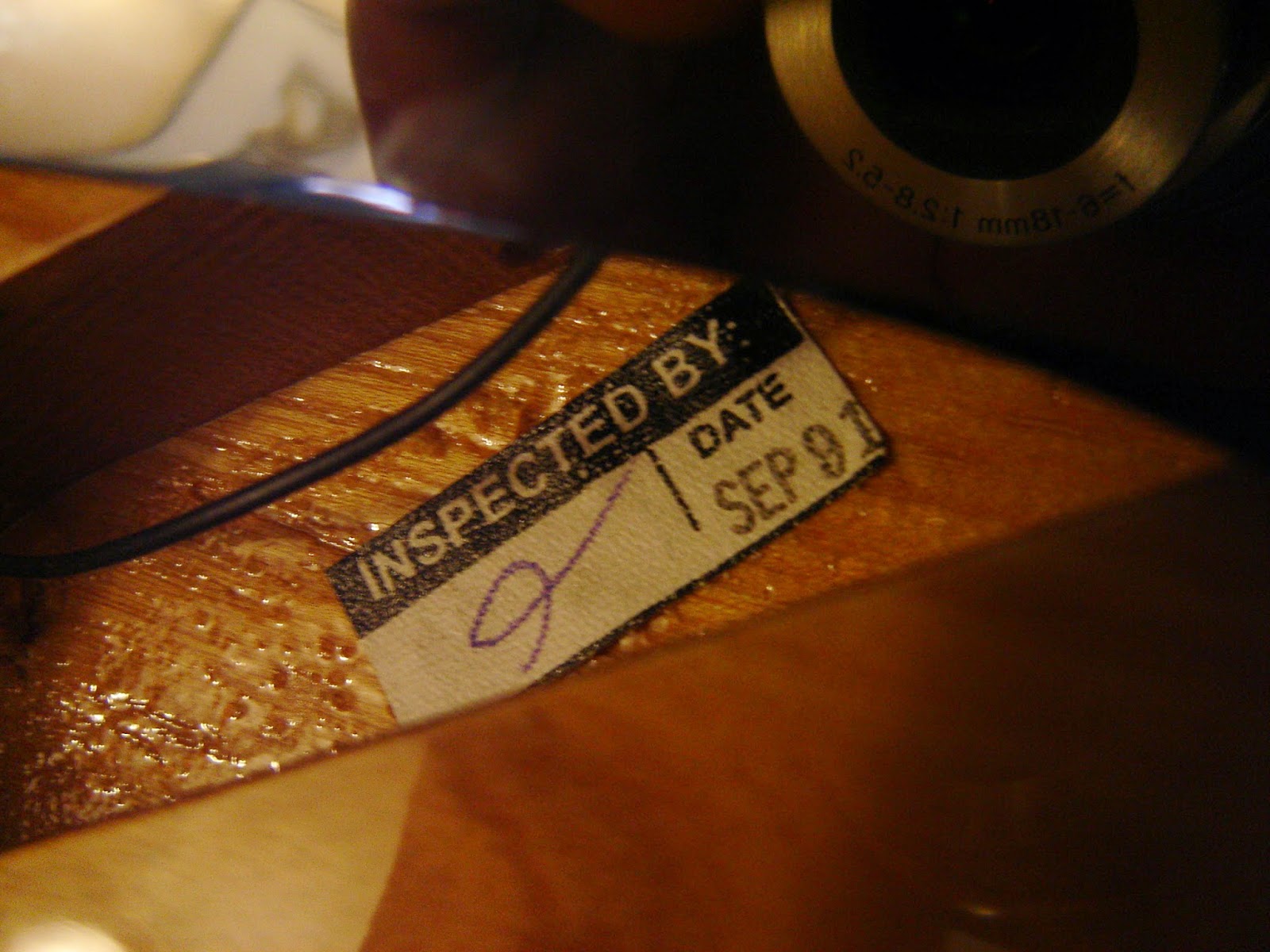 When my Pro bass was starting to look a little fragile I began looking for a second bass to use for gigging. I'd always fancied owning a Jazz bass (I did have a Squier Jazz for a few years as my spare bass before I bought my first Wal. It was defretted and then sold a little later to help fund buying my gorgeous Brook Tamar acoustic guitar). Anyway, it seemed like high time for a return to the wonderful world of the Jazz bass.

I came across BuildaBass through a web-forum I used to frequent and (with the 2:1 UK/US exchange rate of the time) it seemed the perfect way to get hold of a bass at a ridiculously good price.  BuildaBass is operated from the States by Goerdt Lamberts. As the story goes, he bought up a load of bankrupt stock around 1992-3 from a small bass building company from Rhode Island called "Signature". They were making hand-built Jazz bass copies which were just too close to the Fender originals for comfort. They were certainly too close for the Fender corporation's "learned friends". Litigation ensued and the company went out of business. Fifteen years later the left-overs are now available on eBay... According to the labels inside my Jazz's swamp ash body was made in Sept 1991 and it has all the characteristics of a quality, aged body - resonant and woody.  It looks good and, coupled with the high quality stock pickups, it sounds great. 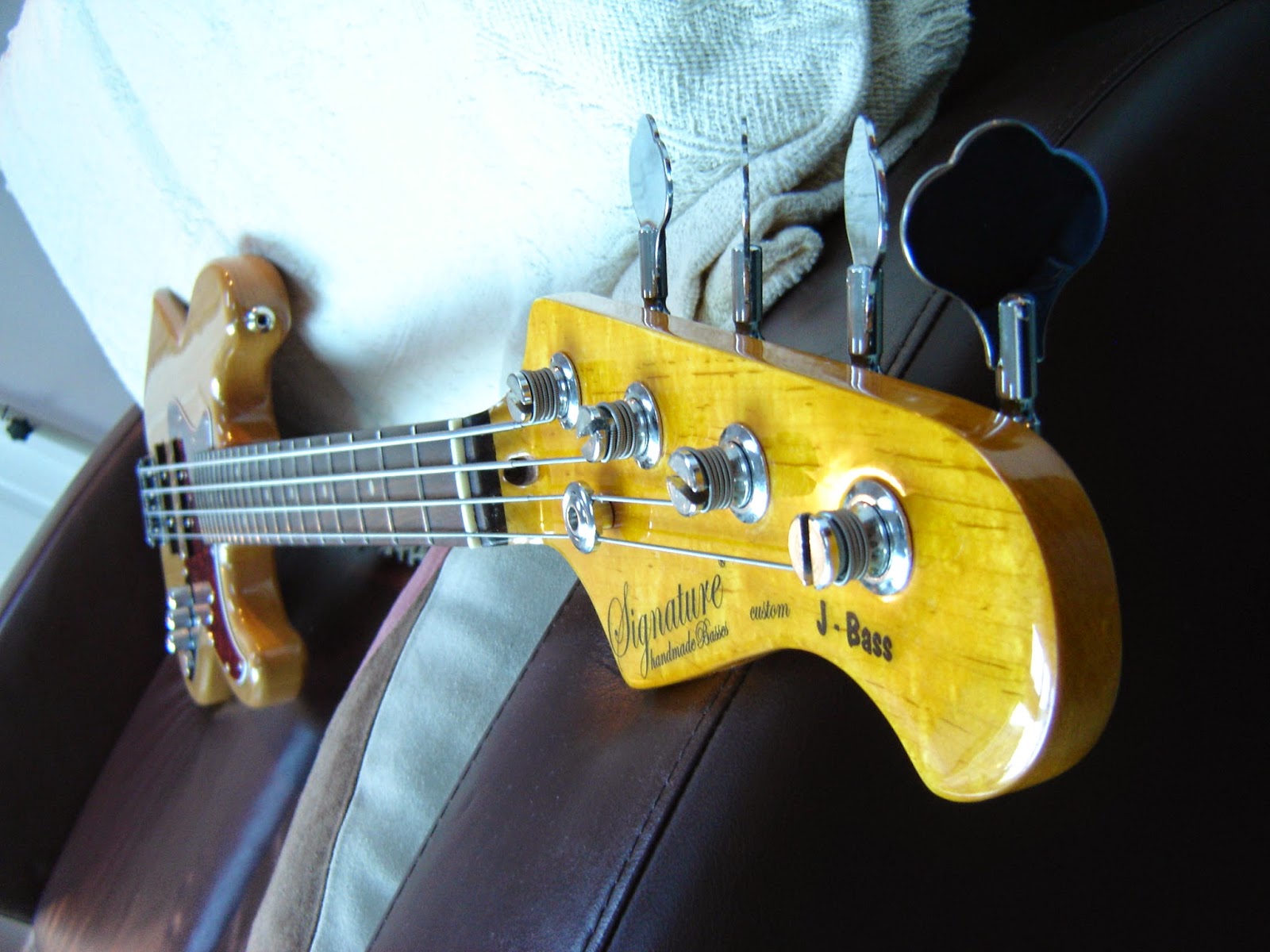 Part of my idea was to make the bass a bit of a Frankenjazz and try out some different bits and bobs. I switched out the tuners for some Hipshot UltraLites, added a set of Graphtech saddles and an amazing preamp by Audere. It simply sounds amazing and is a really good complement to the very different sound of the Wals. It's just a great sounding Jazz bass with a little extra flexibility added - perfect. As a friend recently commented, it's one monster bass... 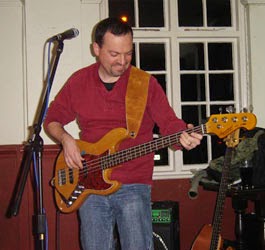 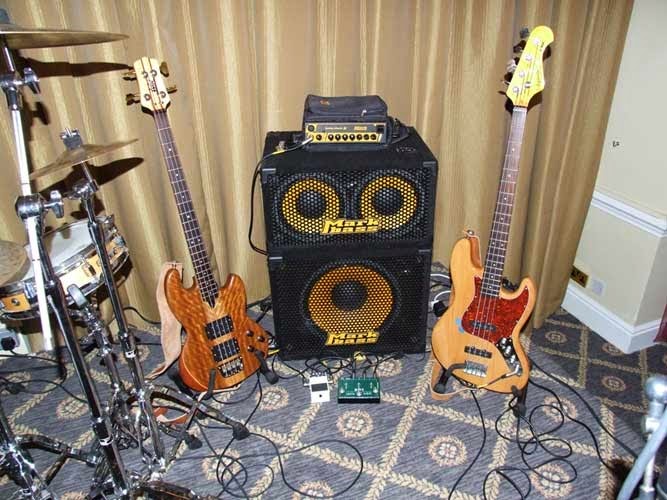 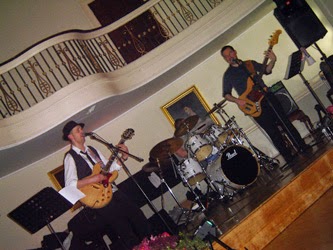 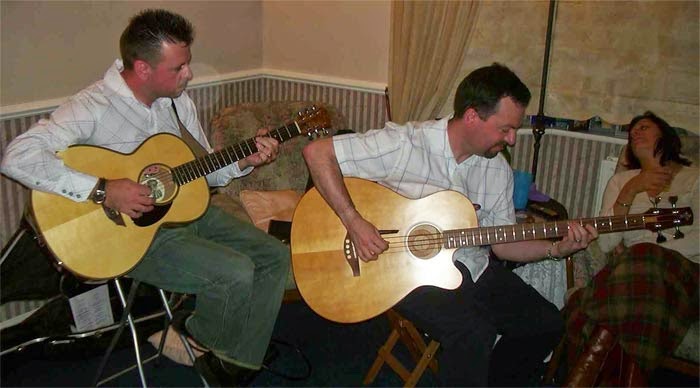 I ordered this bass in 1992 after seeing a review of Tony Revell's guitars in Guitarist magazine.  Tony, an ex-employee of respected UK builder "Overwater", is an independent luthier based in South Wales.  Although he specialises in blues and rag-time guitars he also makes a mean range of other instruments including mandolins, electrics and basses.


At the time there were barely any acoustic basses available in mainstream music shops in the UK - custom built was just about the only way to go.  Fortunately, I had a pretty good idea of the type of characteristics I was looking for in an acoustic and the type of woods and tones I wanted.

I arranged to meet up with Tony to look first hand at some of his guitars and to chat in detail about what I wanted.  One of the great things about buying custom-built is the interaction with the builder and the fact that the instrument is being made bespoke to your requirements.


I recall him probing what I wanted out of the bass. I reassured him that it was largely destined for home use rather than for stage - a pick up wasn't required and it would be great if he could make it sound rich and resonant. His face lit up."Oh brilliant! I can make it a proper instrument and not just a box with strings on! That's great!"

My bass has a solid flamed maple back, sides and neck with a solid European spruce top, rosewood headstock facings, fretboard, bridge and custom finger-rest - all great quality solid woods, of course.  The sound is amazingly deep and resonant with an amazing sustain - not that annoying dull thud that a lot of acoustic basses used to give you. Ah, how times change... eh?


The neck is based on the width and profile of my Aria SB700 (see below) which was my main bass at the time.  So, it has a really comfortable neck which is a pleasure to play on.  However, the most unusual feature of the bass is the neck joint which is completely without a heel.   Amazing access but with a rock stable neck - on an acoustic bass!  Tony Revell, the man's a guitar-making genius!


Playing my Revell bass at my 40th birthday party... 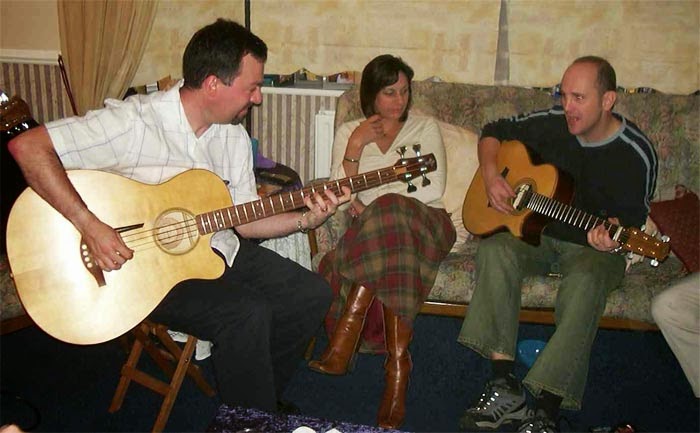 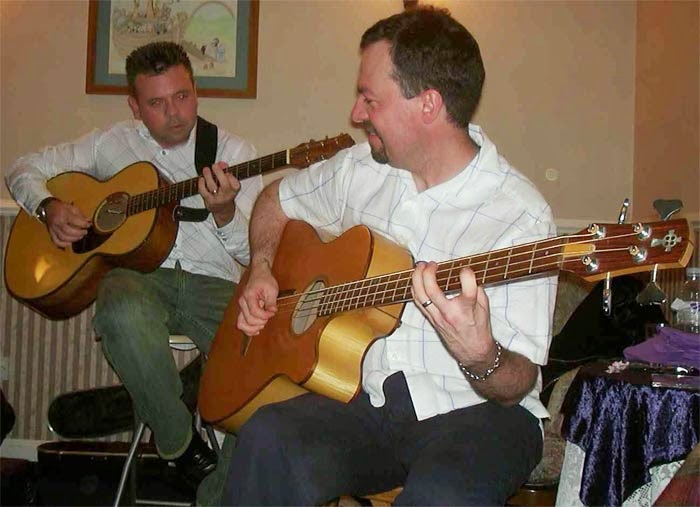 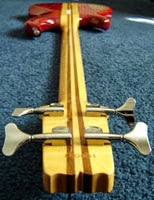 This Aria SB700 was my first ever bass guitar and I still love it!  Passive electronics and one pickup but a thru-neck and ash body wings, this bass plays beautifully and still sounds great!  Frankly, it's far too good a bass for a starter like I was!  I was so privileged to start out learning on one of these.  The bass has a lovely deep round tone - which you can lighten using the small series/parallel switch.  The through neck and heavy brass bridge set into the face of the bass makes for a very clear tone and incredible sustain! On an open string the sustain gets into Nigel Tuffnel territory... "Yeah, you could go off and get a bite an' that one would still be ringing.."


The Aria SB series were one of the first Japanese marques to really compete on even terms against their Western rivals rather than being straight copies (the other being the Ibanez Musician Bass which was famously used by Sting in the early years of the Police).  Honourable mention should also go to Westone's fabled Thunder I and II basses. Well built, highly spec'd and great sounding instruments both the Arias and the Westones were made in the now fabled Matsumoku factory in Japan. However, the Westone basses’ styling always seemed a little "agricultural" and unfinished to my eye - particularly when compared to the Aria's fluid curves and stylish lines. 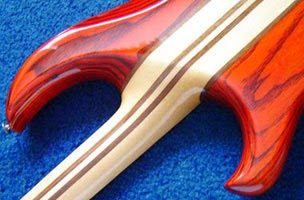 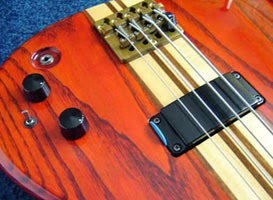 The Arias were well respected instruments and attracted much pro interest, with the top of the range active SB1000 being used by musicians as diverse as Jack Bruce, John Taylor, Marcus Miller and Mike Oldfield.  An SB1000 even appears in the classic video for The Buggles' "Video Killed The Radio Star" while Neil Murray of Whitesnake fame could often be seen toting a twin pickup SB900. 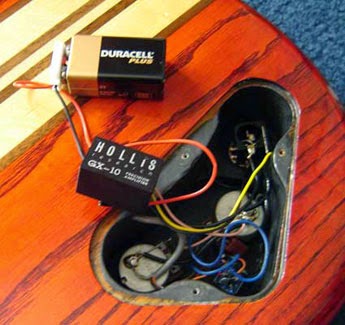 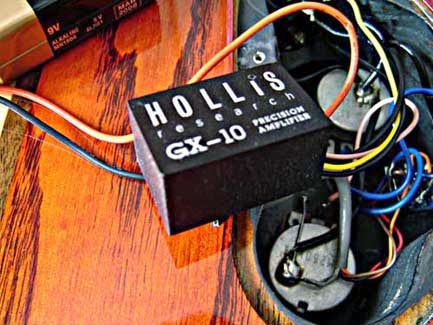 My SB700 was built in 1981 and is in all original condition except for a small mod, adding a little "active buffer preamp" to it - a Hollis GX10.  This is a little black box  from the Channel Islands that's sadly no longer made - I'd love to hear one in a really nice Jazz bass. It doesn't really change the fundamental sound of the bass, just makes it sound more focused and clearer. It changes the impedance so that it's a better level for long cable runs - almost like putting it through a really nice, transparent active DI box.”

Beautiful design went into this bass - not least of all the through-neck and wonderful profiling of the neck/body transition. 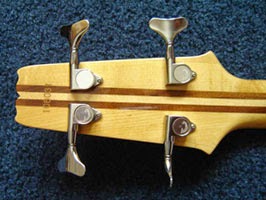 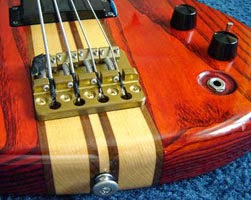 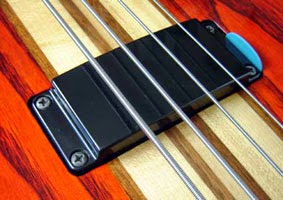 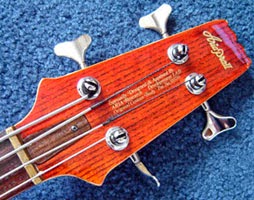 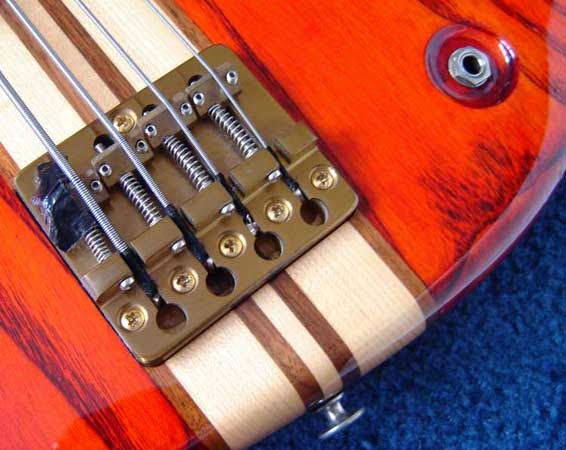 Simple, elegant design was employed and custom-built components were used. There is a solid brass bridge in a design which would have been very innovative at the time. It allows the strings to hook quickly into slots in the heavy bridge. The saddles are then fully adjustable. Its solid design mush help contribute to the solid tone and almost incredible sustain. There is a surprisingly versatile moulded single pickup with volume, tone and series/parallel switching options.
The bass was an 18th birthday present in 1982: a toss-up between that and a metallic pink Overwater. But the Overwater was pink, sparkly and a funny shape… well, that made the decision easy for a spotty teenager!


From then until I bought my first Wal it was my main bass - playing in college bands, church, rock musicals and my old folk-rock band, Tintagel.  Here are a few a few shots of it in action around 1990 or 1991 (gosh, did I ever look that young?).  Nowadays it's only used on the very rarest of occasions. However, with its sentimental associations I doubt I could ever bring myself to get rid of it! 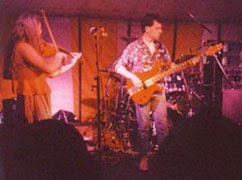 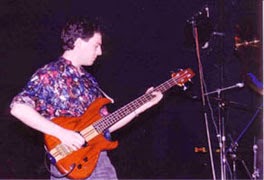 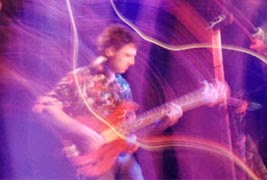