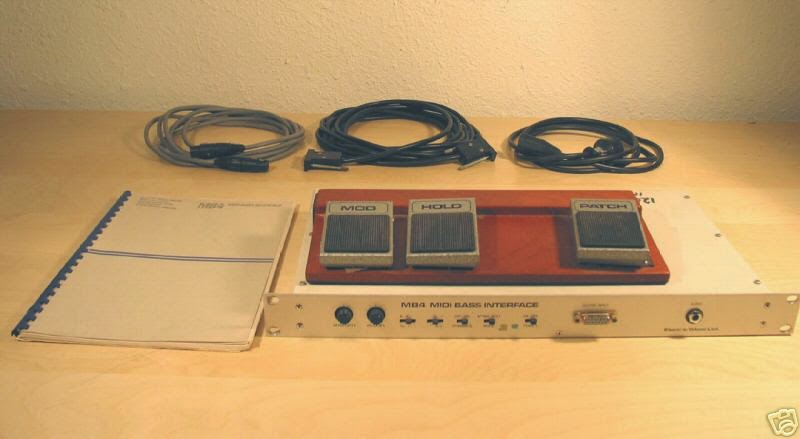 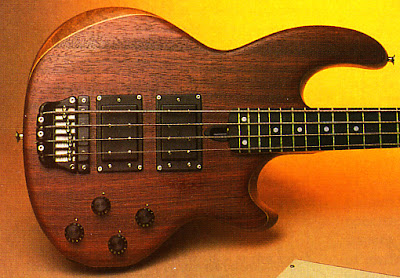 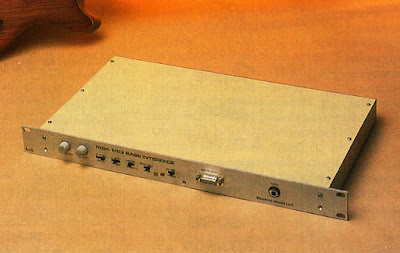 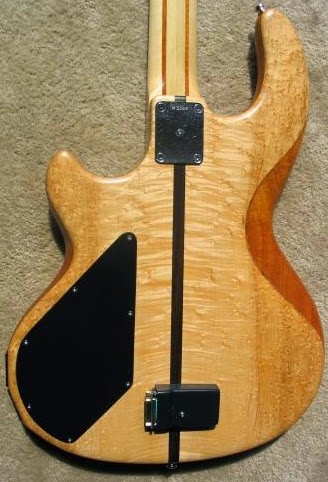 However, on the lower guitar strings the time taken for a couple of cycles was longer. Sufficiently so that many players found the small time lag off putting. For a bass guitar the effects were even greater. A low notes on a bass will vibrate at around 40-50hz. Forty or fifty cycles per second. If it took two full vibrations to accurately track the string then the delay in sounding the note would be 1/20th of a second. If it took four cycles then the delay would be 1/10th of a second. Definitely enough to be audible and to put a player off their rhythm. For a keyboard player, where the keys are effectively just switches, the note could sound instantaneously. This was even worse in the case of the B-string of a 5-string bass.

However, the MB4 system did not rely fully on the hex pick-up for pitch information.  Instead, sensors were built into the frets (each of which was split into four separate pieces) to determine the basic pitch of the note.  Pressing a string onto a fret completed an electrical circuit effectively acting in the same way as a key on a keyboard.  Pitch-bend and dynamics information was then sensed from the hex pickup. In later versions of the MB4 system the hex pick up was dispensed with and the Wal pickups themselves used for dynamic information. 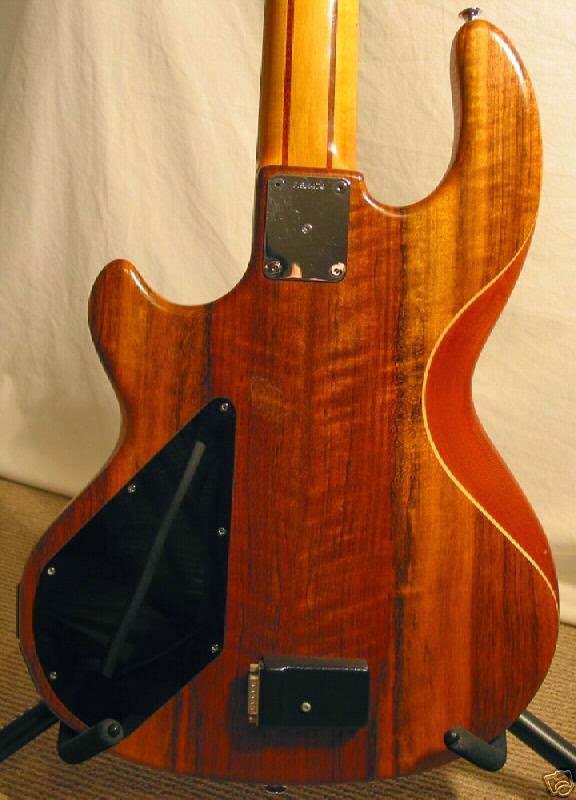 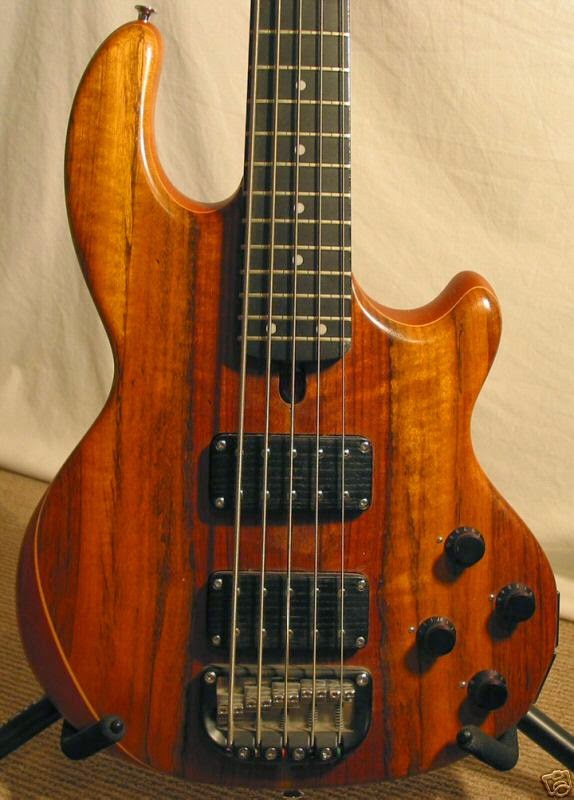 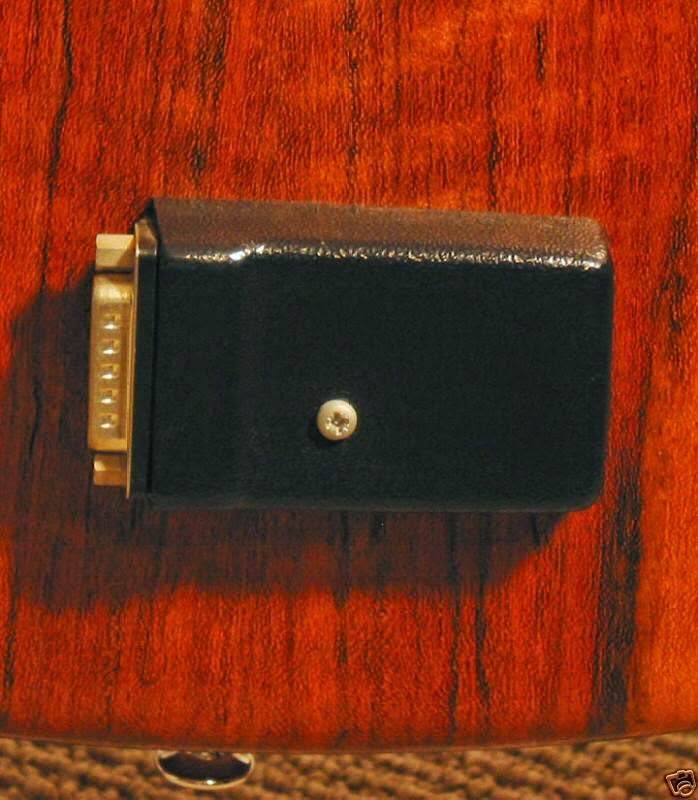 The signal from the bass was sent from a large 15-pin computer interface connector on the rear of the bass, via a special wire, to a control unit.  This allowed calibration and control of the MB4 system (including three modes designed for finger-style, pick and slap/tapping playing.  Further switches gave control over the octave which the synth note is played in, dynamics and monophonic / polyphonic operation.  Additional pedals allowed the player to change synth patches, sustain synth notes and adding modulation effects.  Despite the fact that the controller and pedals have something of a "home-made", Heath-Robinson look and feel to them the MB4 was one of the first really effective bass-synth controllers.

Around 1990 the Wal MB4 Midi bass was launched to much acclaim - mostly because it actually worked without the delay which had plagued other midi-bass systems. A five string variant followed soon after, named the MB5. Unfortunately, after only a few years, the rights to Chick's midi-bass system was bought up by US guitar giant Peavey for the development of their Midibase and then Cyber-bass.  This brought an end to the production of the Wal MB4 (and MB5) midi-bass. These remain sought after items on the second hand market. 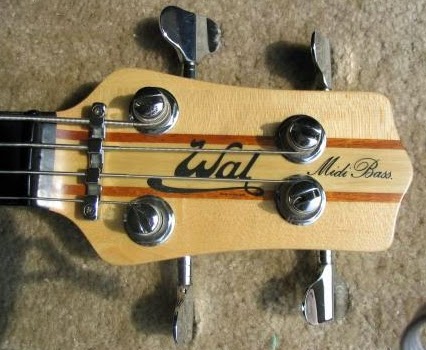 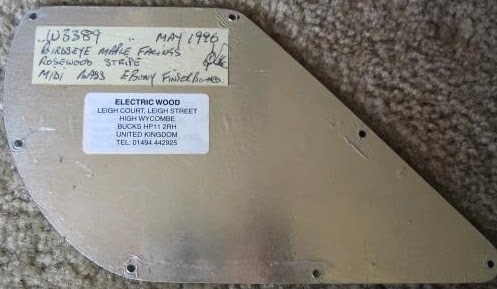 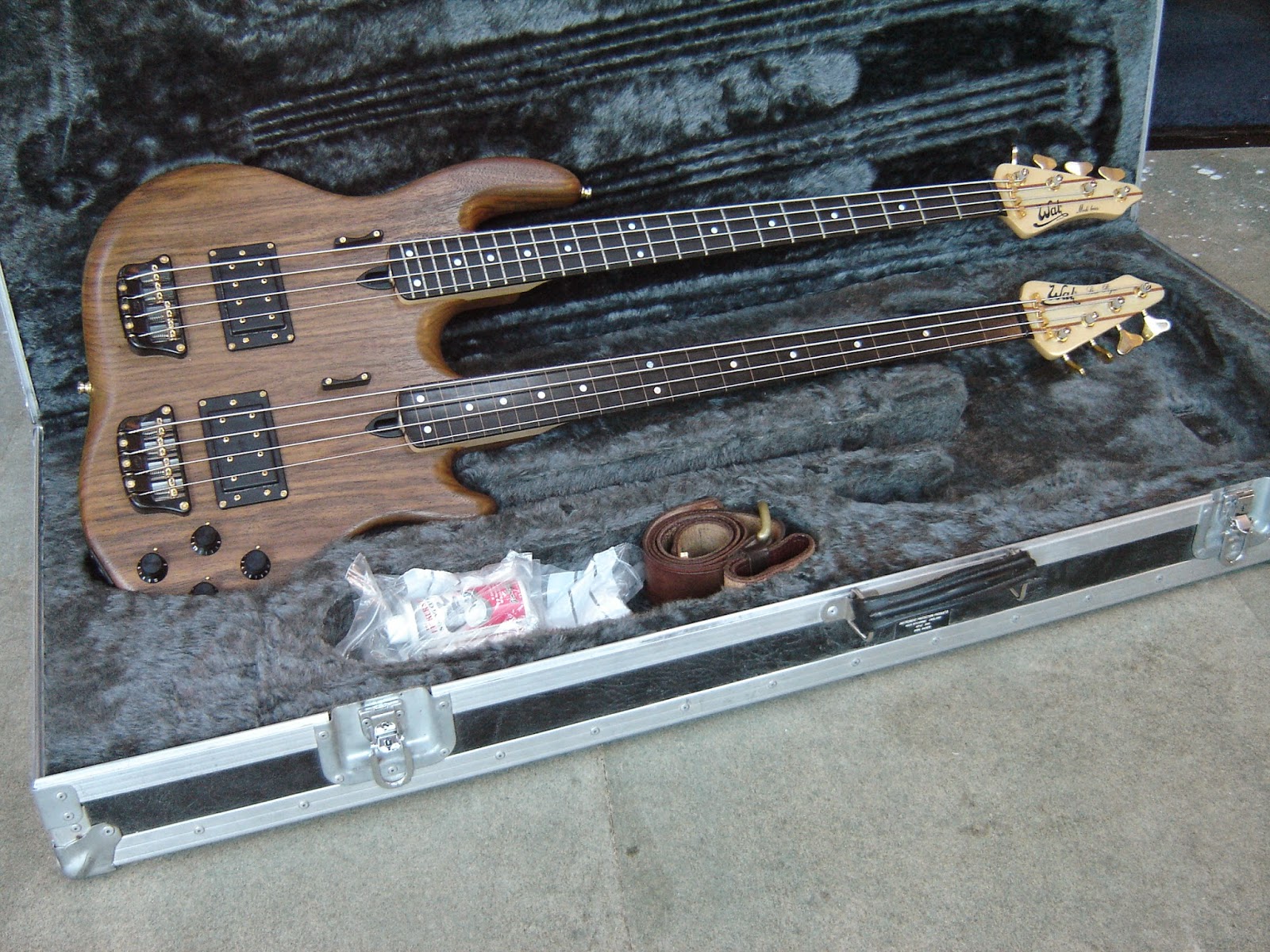 This phenomenal beast came to light in late summer 2005 when its owner at the time, Steve Payne, decided that his under-used beauty needed to go to an owner who would get more use out of it and posted it for auction on eBay.  The bass is solid American Walnut and is equipped not only with the normal Wal tone circuitry on its fretted and fretless necks.  The upper, fretted neck is also midi enabled using the MB4 split fret system.

But, once again, this is not a one-off.  There are rumours of another one in existence which once resided in the possession of fretless wizard and top session dude, Pino Palladino. However, one thing's certain... this bass belongs on a roll call of Wal rarities!! 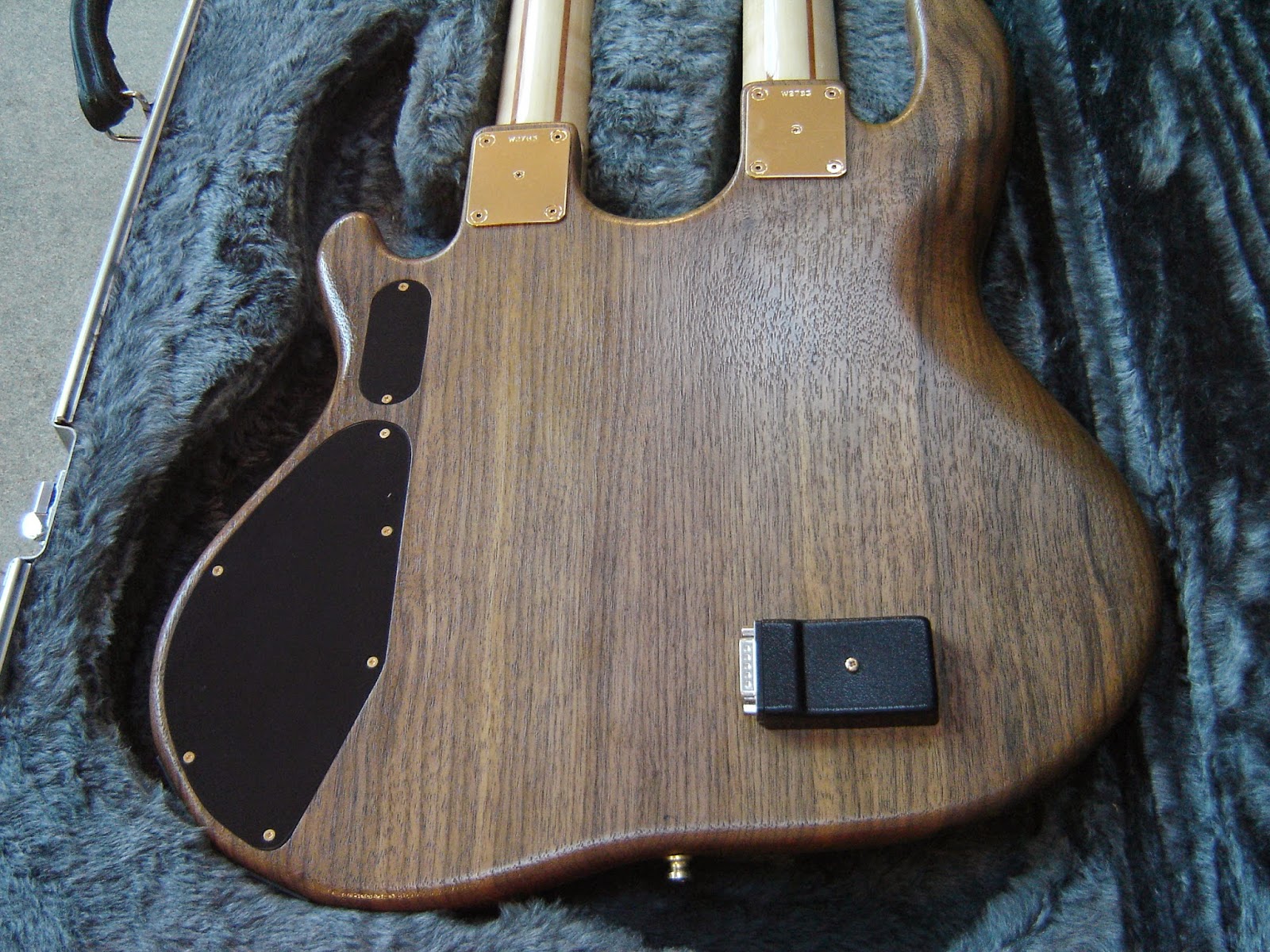 The bass was commissioned by Steve in the mid-'80s (close inspection shows that the lower of the pair of headstocks bears a transfer of his name) when he was doing a lot of studio session work.  He reasoned that, if the two necks would give him some extra versatility in the studio then having one of them midi-equipped and able to drive synthesizer and sampled sounds would increase that versatility to the "N-th" degree.  The thinking seemed to prove right as the bass was used consistently through the rest of the '80s and early '90s in sessions - both by Steve and on a loaned basis.  After doing some sessions for other bands at Mike Oldfield's studio the bass was loaned to Oldfield for the recording sessions that became Tubular Bells II.  Oldfield, having been an Aria SB1000 user in the early '80s went on to purchase his own Wal basses which have featured on his more recent albums, including the special 30th anniversary re-recorded version of Tubular Bells.  It's also been loaned to other well-known bass players, such as Greg Lake (of King Crimson and ELP) and Colin Bass of Camel - both well-known Wal users in their own right.

The midi double neck, like all double-necked Wals is certainly a weighty beast but it still feels very natural to play (certainly seated anyway).  The body has a wonderful natural resonance played unplugged which, no doubt feeds into the excellent amped sound.  Also after around 20 years of regular professional usage it's also in amazing condition - almost completely immaculate.  Clearly the bass has been treated with the respect that it deserves... and quite right too.  It is a rare and beautiful beast. 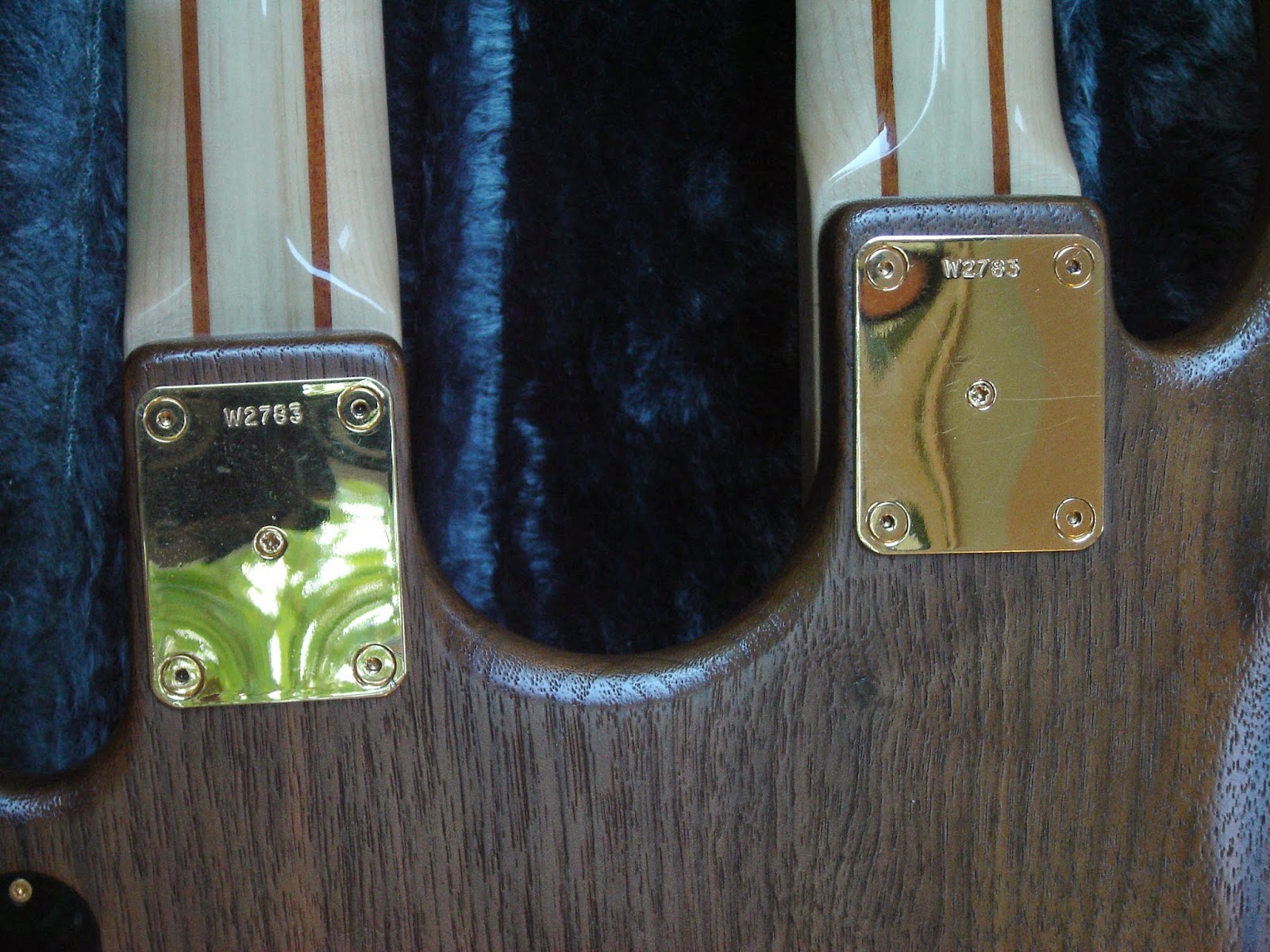 Above: Double neck midi bass - as on all Pro and Custom Series Wals the bass has twin laminated necks but this time with four-a-side arranged tuning heads to facilitate ease of tuning.  Both neck plates are numbered - in this case W2783.  Some double-necked Wals are known to have the necks sequentially numbered (W3561/W3562 - a white poly-gloss finished model.  Click here for a photo from Stephan's Wal Database).

Below: Like most Wal double-necks, the double-midi is single pickup.  To aid playability an additional thumb rest is included where the neck pickup would normally reside.  The split frets, central to the operation of the MB4 midi system, are also just visible in the photograph. 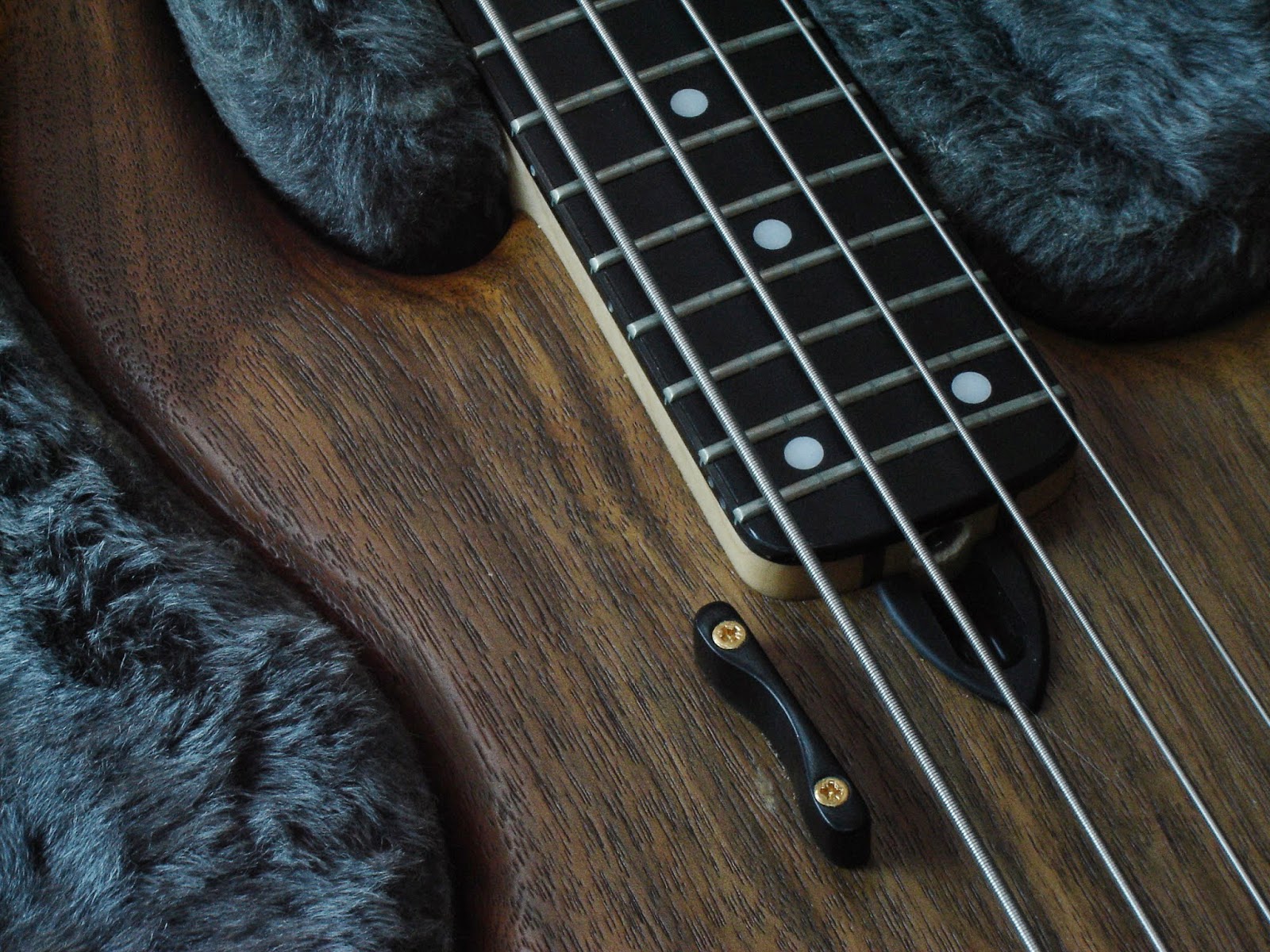 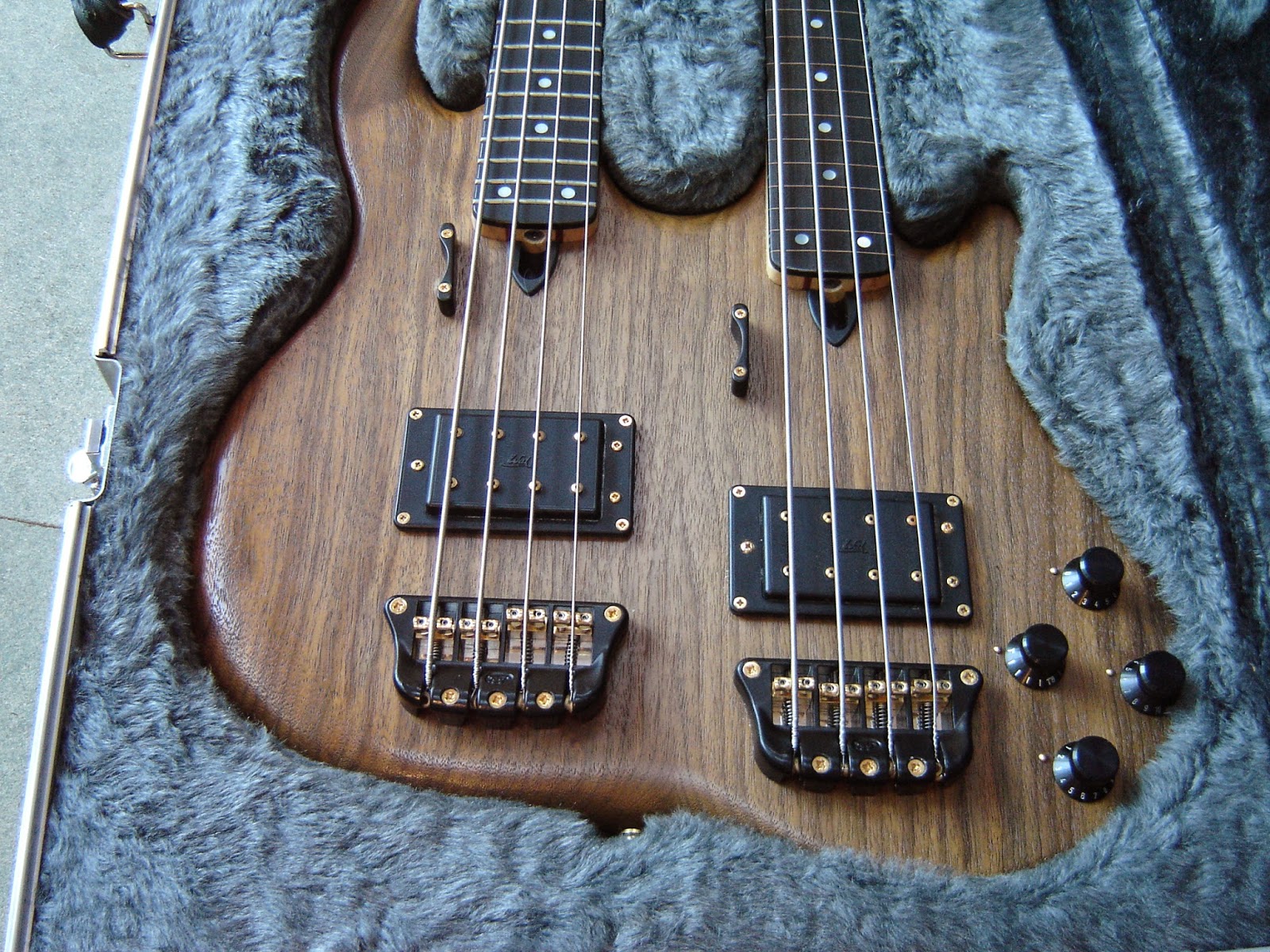 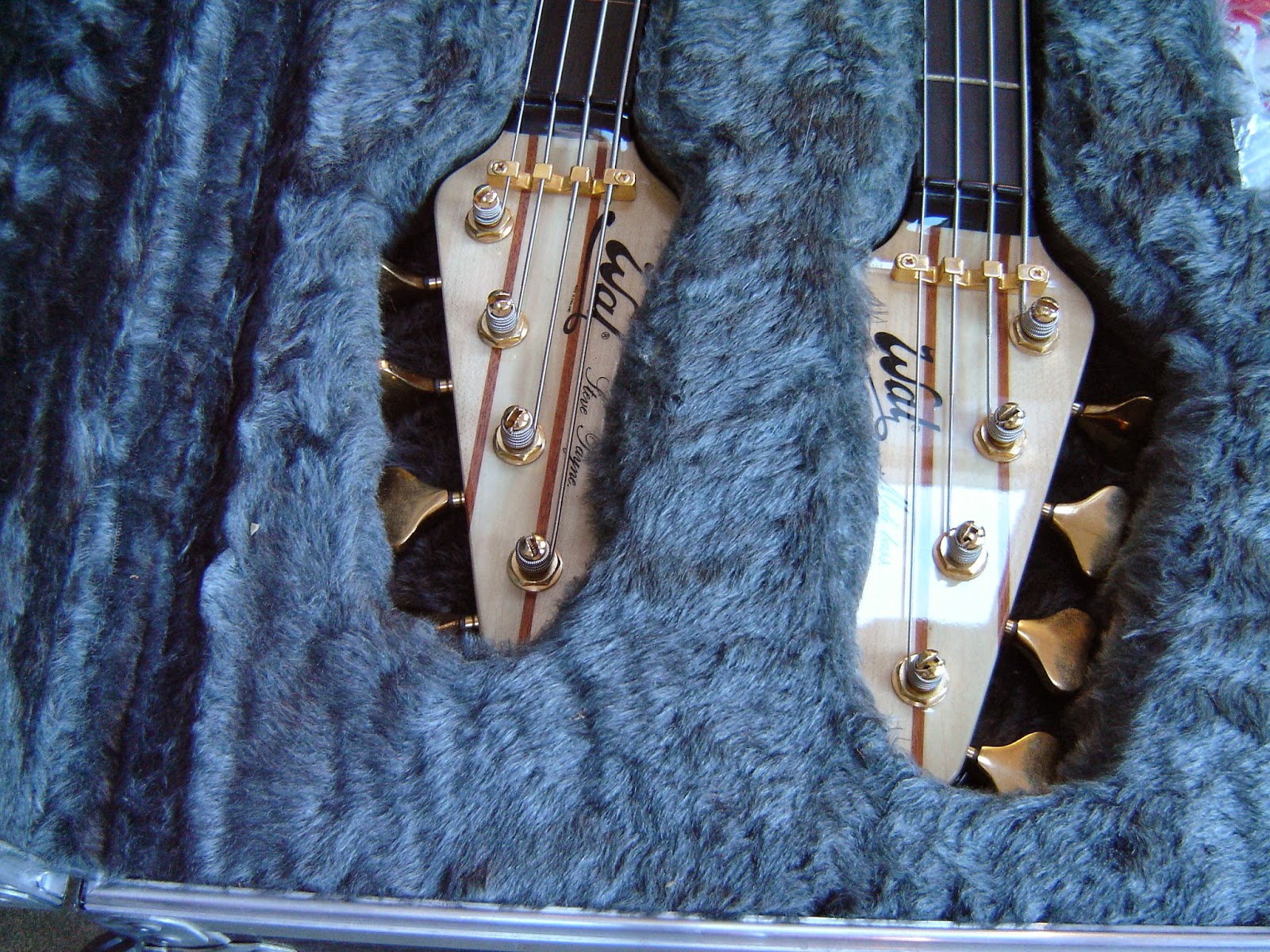 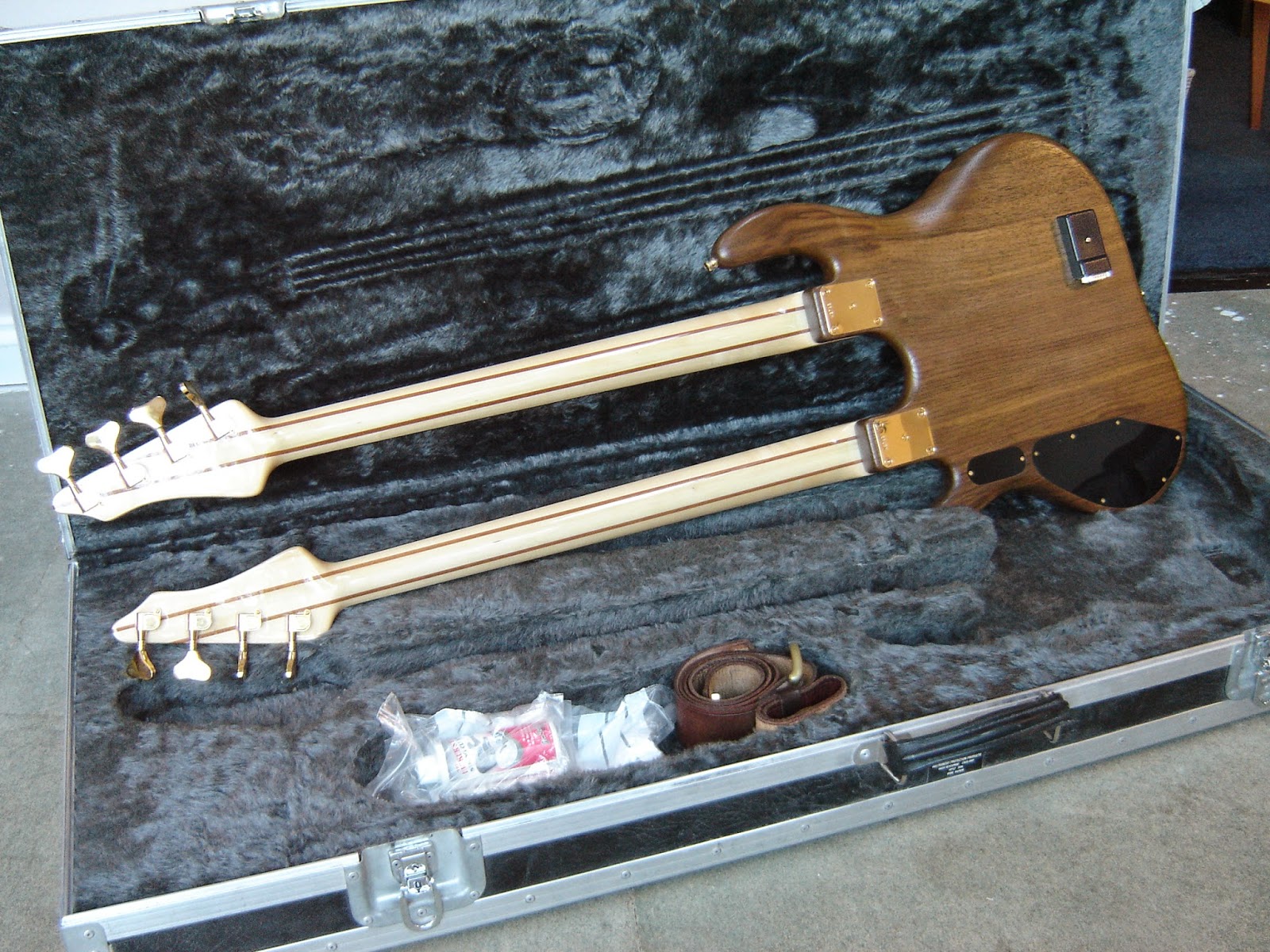 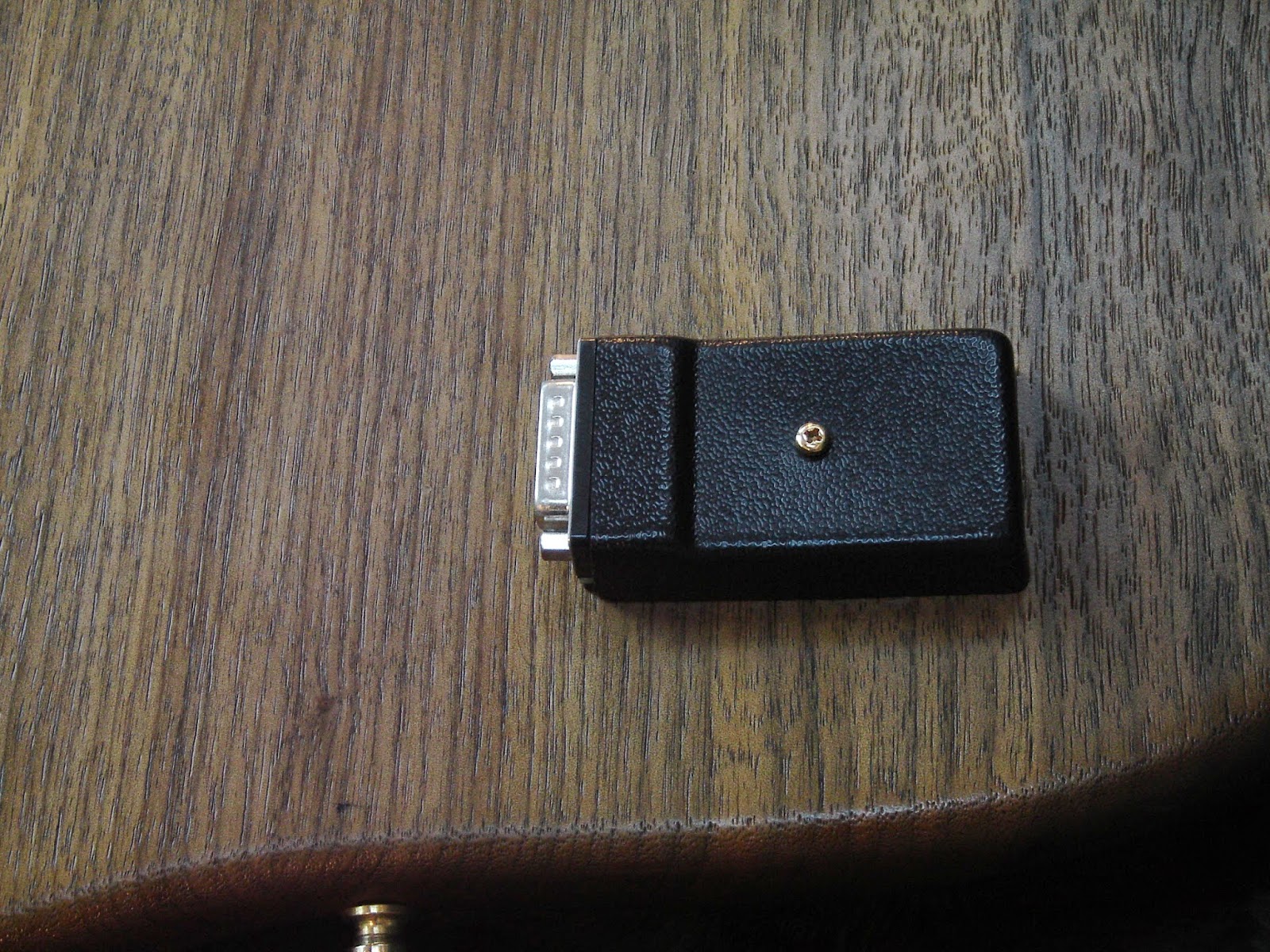 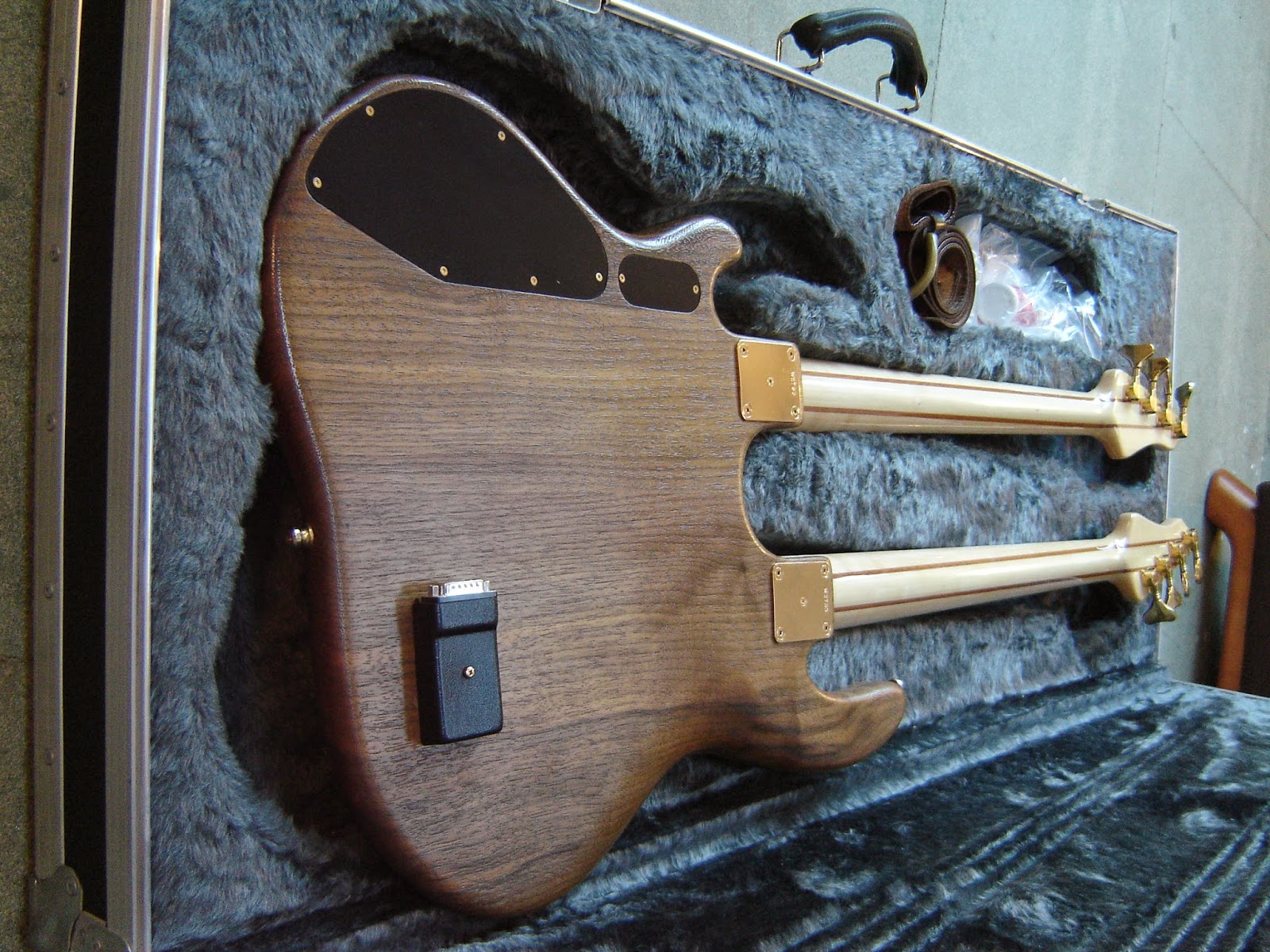 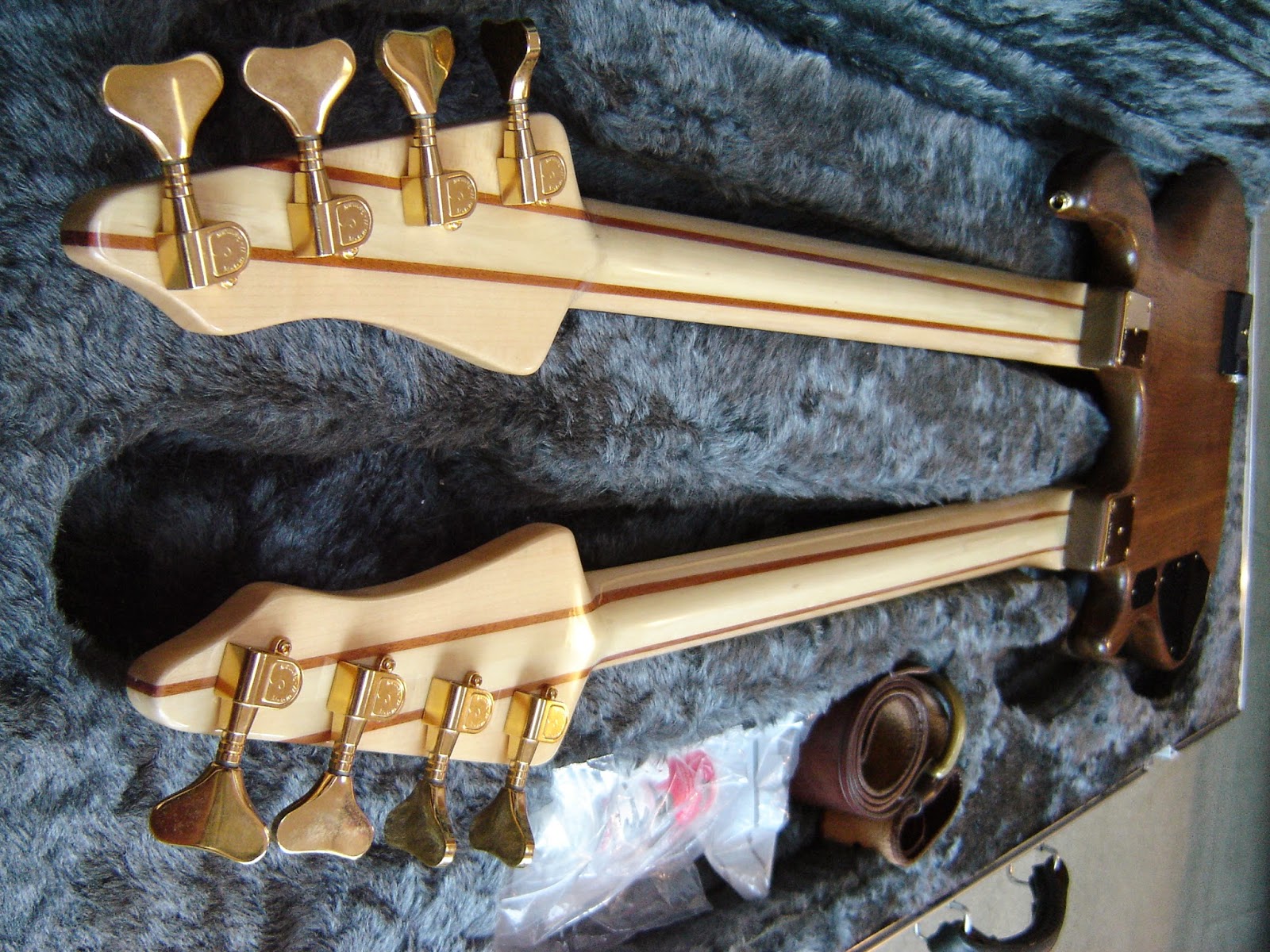